The Inspiration4 crew, who are currently orbiting the Earth, was able to chat with patients from the hospital the SpaceX mission is raising funds for.

The four Inspiration4 crew members answered questions asked by the children from the St. Jude's Children Research Hospital in Memphis.

One of the mission's crew members, Haley Arceneaux, is a physician's assistant at the hospital. 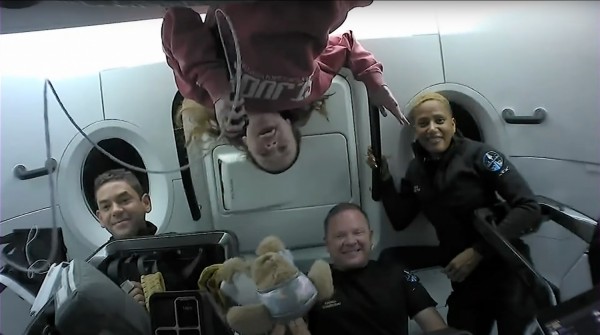 Inspiration4's four-member crew was able to chat with the young patients from the St. Jude's Children Research Hospital in Memphis. One of the crew members, Haley Arceneaux, is a physician's assistant at the Memphis hospital and also a childhood bone cancer survivor.

According to a report by Space, Arceneaux told the young patients of the hospital, "We are thinking about you so much, I wanted to tell you that I was a little girl going through cancer treatment, just like a lot of you. If I can do this, you can do this, and I'm so proud of each and every one of you."

Jared Issacman, the Shift4 Payments founder who was said to have paid $200 million for the mission to happen and to raise funds for the hospital, was asked by a patient named Tyler about why the mission was happening.

Issacman answered that there is still so much that is not known about space, and there may be answers to those questions that can be found by doing the mission.

"But we also have to pay attention to some of the real responsibilities we have on Earth as well. That's why St. Jude Children's Research Hospital is such an important part of our mission," the Shift4 Payments founder added.

SpaceX's Inspiration4 mission successfully launched on September 15 at 8:02 p.m. EDT. The Falcon 9 rocket, which carried the Crew Dragon spacecraft, launched from Pad 39A at NASA's Kennedy Space Center in Florida.

The mission has made history as the first all-civilian mission to space as there are no trained astronauts aboard the flight. One of the crew members, Sian Proctor, also made history as she became the first black female spacecraft pilot to orbit the Earth.

SpaceX and its CEO, Elon Musk, received congratulations from countless people for the success of the launch. Most notably, Blue Origin founder Jeff Bezos tweeted his congratulations to Elon Musk.

As previously mentioned, the Inspiration4 mission is an effort to raise $200 million for the St. Jude's Children Research Hospital in Memphis.

According to an explainer on the SpaceX mission by Space, Jared Issacman "didn't want just another billionaire spaceflight on the books, he wanted the mission to really mean something, so he led a campaign to raise money and awareness for childhood cancer research."

The four members of the crew are expected to conduct medical experiments and research while orbiting Earth. They are also going to record health data that may be useful to future spaceflights.

Also Read: SpaceX Inspiration4: What is Their Mission in Their Multi-Day Journey? Is It Streamed Live?

SpaceX Inspiration4: What is Their Mission in Their Multi-Day Journey? Is It Streamed Live?