New Android games were released in September and some of them are titles worth playing whether you are a casual mobile gamer or someone who takes the hobby seriously. 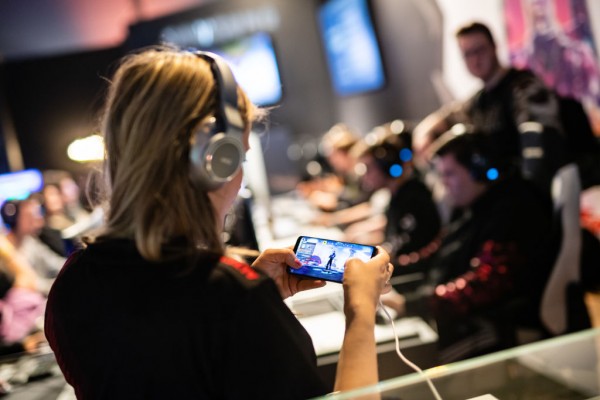 (Photo : by Jens Schlueter/Getty Images)
LEIPZIG, GERMANY - FEBRUARY 15: A participant stands with a mobile phone to play a video game at the 2019 DreamHack video gaming festival on February 15, 2019 in Leipzig, Germany. The three-day event brings together gaming enthusiasts, mainly from German-speaking countries, for events including eSports tournaments, cosplay contests and a LAN party with 1,500 participants.

As apps, specifically, games, sprout like mushrooms on Google Play every month--September included, this guide is here to narrow down the best and latest gaming titles, at least for Android users.

As the name suggests, this game lets users play as the characters from the Bikini Bottom by running either the Krusty Krab or its rival, Chum Bucket, which is run by Plankton.

As per Android Authority, like any other idle game, the Bikini Bottom food chains will be earning more profit as you rise up the ladder of its levels.

What's more, characters from the iconic animated show, namely Mr. Krabs, Spongebob, and Squidward, to name a few, could be hired as employees in the restaurants.

For idle game fans, Spongebob's take on the genre is worth trying. Not to mention that it is free to play.

'The Heroic Legend of Eagarlnia'

Meanwhile, the "grand strategy" game, which first launched on PC last October 2020, is now on Android too, allowing mobile gamers to experience it as well.

The "Heroic Legend of Eagarlnia" is a city management simulator that allows players to run an entire city, which includes tasks like acquiring heroes, commanding workers, searching for weapons and relics, among others.

The Android game sells for a price tag of $4.99, according to its Google Play Store listing. Thus, there are no in-app purchases in the gaming title.

Here is another free-to-play game on the list. This new rhythm game requires its player to tap and swipe to hit the notes.

Beatstar will only need your first three fingers to play as it only sports a three-lane setup.

It is worth noting that this rhythm game is unlike previous counterparts that usually use techno beats. On the other hand, "Beatstar" plays pop songs that are familiar to its players.

And the last free-to-play game is an open-world action RPG under the iconic comic book maker, Marvel.

The developer of the game, NetMarble, is behind the first of its kind for Marvel on mobile.

The playable characters in the game are comic book and blockbuster icons like Spider-Man, Ironman, Captain America, Doctor Strange, Black Widow, Captain Marvel, Storm, and Star-Lord, as per the website of "Marvel Future Revolution."

Not to mention that the Marvel characters could sport customizable costumes, which the players are encouraged to buy early on in the gameplay.

This Android game is the second remaster of Final Fantasy IV for mobile phone users.

The latest version of the remaster now flaunts a 2D pixel, instead of the earlier 3D graphics.

It is to note that the latest version of "Final Fantasy IV" is likely based on the SNES of the gaming title. As such, the overall gaming experience is a lot faster and smoother.

However, the downside of this game is its hefty price to the tune of $17.99 for a 2D game, but some of the franchise fans would not even mind.