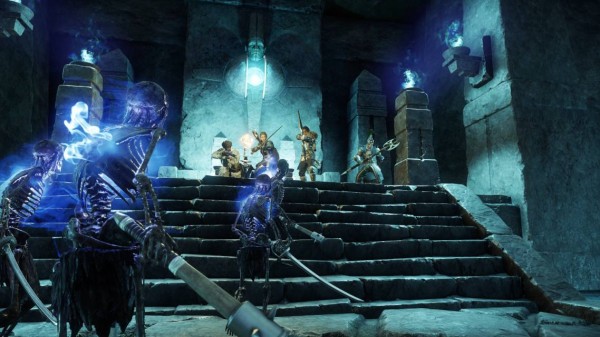 There's so many players trying out the game right now that, according to reports, queue times are way too long.

As such, the developers of "New World" are trying a few ways to reduce these queue times, reported IGN.

Amazon studios have been keeping players updated of any changes on the newly created New World forums for the first day of its official launch.

Their solution to the long wait times is to add a few extra worlds to different servers, with the North America West, North America East, Australia, and EU Central servers getting first crack.

Aside from adding all these additional game worlds, Amazon Studios is also offering free server transfer for the next two weeks, according to GamesRadar.

Currently, the devs are trying to expand their server capacity to let players log in and start playing quickly.

The developers' aim is to offer a much more even spread of players across the "New World" map. To do this, they are promising to closely monitor world congestion, which suggests players could expect more expansions down the line.

Despite these issues, however, the Amazon MMO quickly became Steam's most played game of the year despite having only been out for a day at the time of this writing.

The game's all-time peak player count topped 200,000 players, which according to IGN is higher than previous record-holder "Valheim."

For those who want to get in on the hype, you can visit a fan-run site called New World Status, which provides live tracking of player counts all across the world.

You can also see how many people are queued for any in-game world, as well as an average wait time so you know what kind of waiting you're getting into.

'New World:' The Troubled Early Days Of The Amazon MMO

To say that the now-massively popular Amazon MMO had a troubled start is a massive understatement. Frankly, this unexpected success is a much-needed change of pace for the game.

Perhaps its biggest controversy was the time it allegedly destroyed a bunch of NVIDIA RTX 3090 graphics cards, which made the headlines last July.

Considering how these cards regularly cost upwards of $2,000, this was a very big deal.

There was also news of several big Twitch streamers not being impressed when they got to try the game early. A few of these streamers include Summit1G and Asmongold, with the latter claiming that the game's enemy variety was sorely lacking.

For now, Amazon Studios will have their hands full to try and contain the still-growing player base of their game.

Official reviews for the game from major publications are still due, though despite the massive player counts, the game's Steam user reviews are still in the "Mixed" category, according to its official Steam page.

For more updates, check back in here at Tech Times

Related: EVGA Says that 'Bad Soldering' Was The Reason for RTX 3090 Deaths During 'New World' Debacle