iOS 15: CarPlay Does Not Work Properly on New iPhone 13

iOS 15 and iPhone users have experienced some issues lately when using Apple CarPlay.

According to the complainants, there is an unusual bug that crashes the app just in time when the user selects a song to play.

The problem was seen to be present on popular music streaming apps such as Spotify and Apple Music. 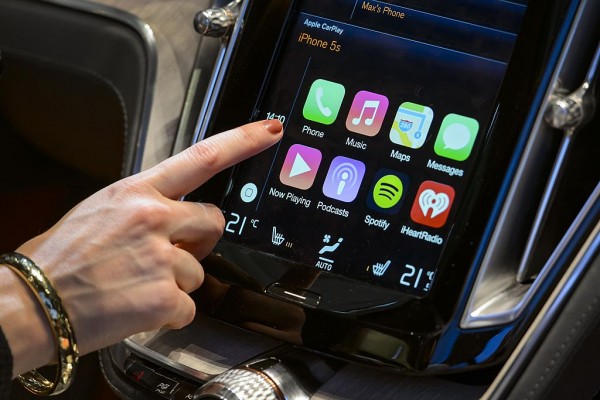 (Photo : FABRICE COFFRINI/AFP via Getty Images)
A visitor presses the new Apple's CarPlay touch-screen commands inside the Volvo Estate concept car displayed at the Swedish carmaker during the press day of the Geneva Motor Show in Geneva, on March 4, 2014. Apple announced that autos will roll out this year with CarPlay technology making iPhones helpful road-trip companions, complete with Siri tending to messages. Ferrari, Volvo, and Mercedes-Benz will show off the technology this week at a car show in Geneva, but the long list of auto makers incorporating it into models included Honda, BMW, Toyota, and General Motors

From what Macrumors spotted all over several Apple forums, many users said that despite the app crash in iPhone 13, the issue does not happen in the older smartphone models.

One person commented in a forum that when he updated the iPhone 11 to iOS 15, there were no problems encountered using Carplay.

However, when he used the iPhone 13 mini, the app began to stop working.

While some believed that the iOS 15 is still unstable, others said that the CarPlay problem could stem from either wired or wireless options.

Another user said that he has iOS 15 installed on iPhone 12.

Although his device was working, the problems surfaced when he upgraded to iPhone 13. Upon playing Spotify in CarPlay, the app immediately shut down. He concluded that the application closes when he clicks a song.

Still, many believe that Apple's support page will lay out important fixes when the new update arrives.

What happened to CarPlay is only one of many iOS 15 bugs that were hitting iPhone users lately.

On Thursday, Sept. 30, there were lots of concerns raised about the iMessage app glitch that removes their saved photos.

According to Nerschalk's report on Friday, Oct.1, the first common problem with the CarPlay is when the app disconnects upon playing a song.

Moreover, a similar case happens when Maps and other apps play the music.

The second known problem is the problem of CarPlay and re-organizing the apps through the iPhone settings. One user over Reddit noted that he could not search for the re-arranged stock apps in the menu.

The third one is the malfunctioning SiriusXM app. When used with CarPlay, users are unable to connect with the message.

The last problem would be the sudden closing of streaming apps, which was mentioned before.

How to Fix CarPlay Issues

Again, Nerdschalk shared that there are seven possible solutions that you could try to get rid of the iOS 15 bug in CarPlay.

Here are the following steps that you should follow:

Somehow, Apple CarPlay has been previously reported to be a hindrance to drivers. Along with Android Auto, these apps we found out to have been reducing their reaction time by 53%.