NASA Perseverance Discovers Mars’ Jezero Crater to be a Lake, Hints to a Previously Warm Planet

NASA Perseverance has done it, and it is with its rigorous research on the Red Planet, where it has discovered the "watery past" of Mars via the Jezero Crater that was once a lake. The research has opened up a lot of new possibilities to explore for NASA and Perseverance, as well as a look at the history of the Red Planet.

The initial mission of Perseverance is to look for signs of water on the Red Planet, and it aims to determine if there is still a source of hydration on the planet, as several people eye it to be the next human destination.

SpaceX is also on its way to Mars with the Starship and Super Heavy Booster rocket venture to make life multi-planetary. 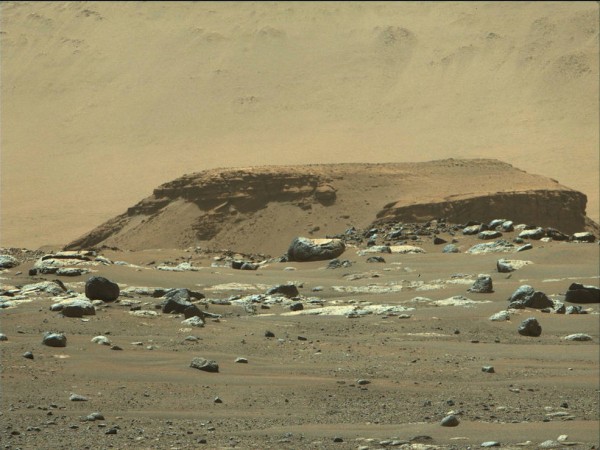 (Photo : NASA/JPL-Caltech/ASU/MSSS)
This image of “Kodiak” – one remnant of the fan-shaped deposit of sediments inside Mars’ Jezero Crater known as the delta – was taken by Perseverance’s Mastcam-Z instrument on Feb. 22, 2021.

NASA has reported that the Perseverance and its research team have found something that is a massive discovery for humans and its venture to space. And that the iron-rich planet of Mars has once had water flowing on its dry and cold lands, making it once a planet that was alive, warm, and liveable.

However, this is still not considered as a precursor to the planet once having life forms or even the extraterrestrial creatures that once lived there.

This must be discovered by NASA, as it could suggest that Mars was once a planet that was teeming with life. Notably, this event of having water is still attributed to billions of years ago and does not necessarily mean that water is still available on Mars, as it was originally discovered in analysis that it already ran out of it.

Read Also: ISS Astronauts To Welcome Russian Film Crew On The Station For A Movie Shoot

The research of Perseverance and its team has been published via Science's publication, and it holds the different findings that are not limited to the signs of water initially found on Mars. The research has greatly focused on the Jezero Crater to be once a lake and that the body of water has helped in the formation of the crater.

Additionally, several indications that water from the lake was also seen from outside of the crater, and it helped in bringing several sediments of rocks that have made Jezero what it is today. Several thousand years ago, the research found that Mars has bodies of land that are thick enough to hold out water and have it flowing.

A rock outcrop called "Kodiak" has been seen by the Perseverance, and it suggests another sedimentation remnant from Mars, which further supports the water findings.

Moreover, it was said that NASA would use this opportunity to locate potential regions or locations on which Perseverance would research more, especially as it drills underground to look for fossils.

The watery past of Mars would help in answering where NASA should look for remnants, fossils, and other important elements to give humans more information about the Red planet.