Telsa's CCS adapter will be released in Korea first after its previous delay. However, electric vehicles or EV owners in North America have to wait a little longer. 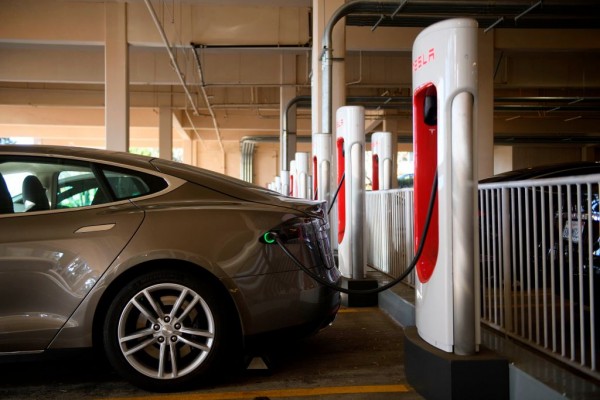 (Photo : by PATRICK T. FALLON/AFP via Getty Images)
A Tesla Inc. electric vehicle charges at a supercharger station on January 4, 2021 in Redondo Beach, California. - After shares rocketed higher in 2020 on surging auto deliveries, Tesla enters 2021 with plenty of momentum even as its vision of taking electric cars mainstream remains a way off.

The CCS adapter of Tesla is meant to allow its users outside Europe to use the public fast-charging stations that do not support the proprietary plug of the EV firm.

Tesla confirms that the CCS adapter will be rolling out in Korea this month, along with its release schedule.

Tesla Korea shared that its release on the Tesla Shop will begin on Oct. 26, but the schedule is still subject to changes depending on the customs clearance.

However, Tesla assured that it will be releasing another version for the said models at a much later date.

On the other hand, Tesla has yet to release a CCS adapter for the proprietary port of the EV giant, which markets such as North America get.

As such, North American Tesla owners could not plug into other charging stations that mostly use the CCS standard. Although Tesla users in North America badly need the CCS adapter as much as South Korea, the EV giant has yet to announce its release.

It is to note that Tesla has already switched to CCS in Europe during the launch of its Model 3 and the Supercharger V3, as per Electrek's latest report.

On top of that, Tesla also released a CCS adapter for both the Model S and the Model X to adopt the growing dependence of charging stations to the said port.

However, the adapter that the EV giant released was only compatible with the standard charge connector in the region, which is Type 2. The carmaker even offered to retrofit the oldest vehicles of its customers last May 7, 2019.

That said, users in the continent will no longer need the adapter to charge in public charging stations.

According to DriveTeslaCanada, the EV firm confirmed last Dec. 16, 2020, that it is set to release its CCS charging adapter in Korea in the first half of 2021.

Tesla Korea further said that the new adapter seeks to "enhance the customer charging experience" in the Asian nation that already has 33 Supercharger stations, along with 150 destination chargers.

However, its launch in South Korea was delayed despite getting a certification in the Korean Agency for Technology and Standards or KATS last June.

Tesla also first confirmed that it is also working to release the CCS adapter to the United States and Canada, but has never revealed when.

That said, it turns out that its users in North America will have to wait--how long? No one really knows yet.