HTC has been planning to release a new VR headset for a while now, and it looks like their new product was just leaked ahead of the official reveal.

Blass' tweet revealed the design for the HTC Vive Flow, which weirdly doesn't look like a VR headset at all, but a pair of bulky, techie sunglasses:

For the first few images of the HTC Vive Flow, it is seemingly revealed that the virtual reality headset has a tether to what looks like a portable device. This could potentially be a smartphone or a tablet, or perhaps even a laptop.

And, owing to its looks, the Vive Flow doesn't seem to have a strap that goes around a wearer's head. In fact, it looks like it's using temples similar to eyeglasses, which could mean that it's far lighter and more compact than any other headset before it.

In a report by The Verge, a few more details about the HTC Vive Flow were suggested based on a few more images.

For one, the new HTC VR headset possesses a blower-style cooling fan for all those inner components, as well as internal processing. As for the device it's tethered to, it could be a tube-shaped one that resembles the one that came with the original Magic Leap headset.

HTC Vive Flow: Under The Hood

Since HTC still won't announce the Vive Flow until September 14 (tomorrow, from the time of this writing), there's no official word on what kind of hardware it's using.

The few things that are known come from bits of information obtained by RoadToVR.

According to the site's report, new regulatory filings submitted by the HTC to the US Federal Communications Commission (US-FCC) revealed details such as the headset's model number (2Q7Y100), which doesn't seem to match previous Vive headsets.

Another detail potentially reveals that the HTC Vive Flow is largely standalone. Wi-Fi test reports seemed to be included in the FCC filing, which were done to make sure that it's Wi-Fi range is within legal limits. It also appears to use an 802.11ac adapter, or Wi-Fi 5, despite Wi-Fi 6 already being out.

This Wi-Fi adapter makes it far different from other dedicated VR headsets, which tend to use some form of Bluetooth and not Wi-Fi.

Back in February of last year, HTC teased a concept for a mixed-reality headset they called Project Proton, writes CNET. Curiously enough, the Vive Flow bears a striking resemblance to the concept.

According to CEO Yves Maitre, their plan with the Proton is to "evolve" the Vive headset into something as streamlined and light as a pair of glasses. Should this leak prove accurate, then HTC's plan has become reality. 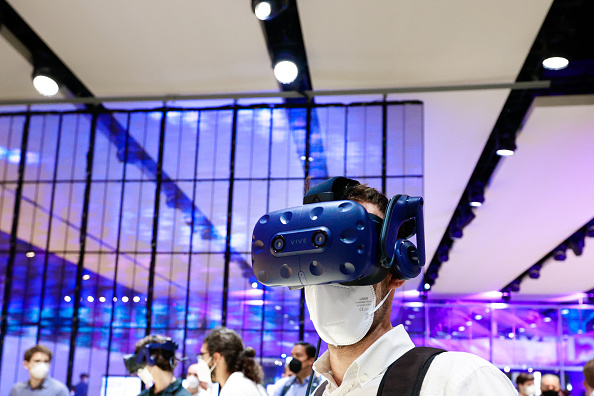 (Photo : Joan Cros/Corbis via Getty Images)
BARCELONA, SPAIN - JUNE 29: A congress attendant with the Htc vive during the second day of the Mobile World Congress (MWC) Barcelona, on June 29, 2021 in Barcelona, Spain. Barcelona's Mobile World Congress, the world's biggest mobile event, is opening its doors to the public for the first time after the trade show was cancelled last year due to the Covid-19 pandemic.

HTC themselves have so far declined to comment on the leak. They did, however, make the presentation date clear: October 14, 2021, with the tagline "Go With The Flow." The presentation will be streamed at the Vive.com website.

Related Article: VR Fitness Games You Can Try to Take Your Workout to the Next Level

[VIDEO] Oculus VR for All! This Developer Builds Real-Life Virtual Reality Room While Stuck at Home!