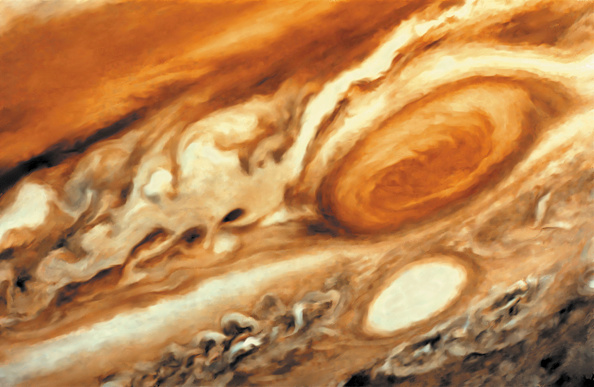 (Photo : QAI Publishing/Universal Images Group via Getty Images)
Jupiter, It is thought that the Great Red Spot on Jupiter is a huge storm, twice the size of Earth, with winds of 360 km/h.

The mission, named after the mythological Roman deity's wife (Jupiter is the husband of Juno) has been able to observe the gargantuan storm from much closer than before.

According to NPR.org, it's gathered enough data to suggest that the Great Red Spot is way deeper than previously thought, and that it's changing over time.

Data collected by the Juno spacecraft states that the Great Red Spot is roughly 300 to 500 kilometers (186 to 310 miles) deep, writes The Verge.

Planetary scientist Paul Byrne of the Washington University --St. Louis likens the spot to any storm here on Earth. He says it's basically composed of very dense clouds, not unlike a typhoon or hurricane.

But it's no ordinary storm. Data from the NASA Juno spacecraft indicate that it actually has its own gravitational field.

The field is even strong enough to make Juno slightly wobble during its 2019 flyby of the spot.

Its gravity is likely due to its insane size. At roughly 10,000 miles across, Jupiter's Great Red Spot is bigger than Earth itself.

According to the scientists here, the gravitational field of the spot is creating "speed bumps" for NASA's Juno that it's causing its radio signals to be stretched and squeezed.

This is a phenomenon known as the Doppler shift/Doppler Effect, which explains why the siren of a passing ambulance, for instance, sounds different from afar compared to when it's close to you.

Jupiter's Great Red Spot has been continuously observed for roughly 200 years. The Juno mission by NASA is the first one to let astronomers observe it closely. And now, they seem to have observed that the Spot has been shrinking. 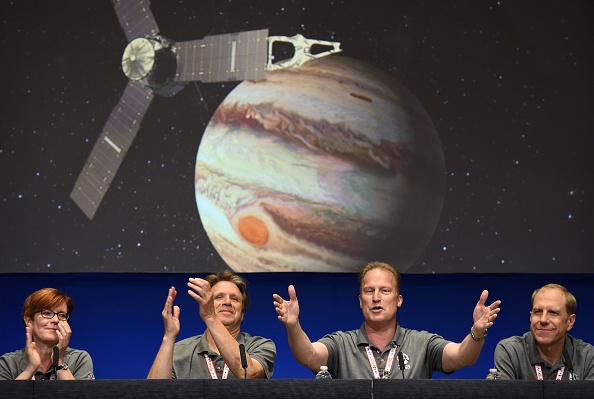 This has been the case, as per NASA astronomers, since the Voyager spacecraft made a flyby back in 1979. However, they also say that the Great Red Spot is actually growing "taller" as it shrinks in diameter, which says a lot about its perceived depth.

The Juno Mission: A Closer Look

NASA first launched the Juno spacecraft on August 5, 2011. It started orbiting Jupiter on July 4, 2016, with the main goal of closely observing what's going on in the gas giant's atmosphere, writes Space.com.

The spacecraft itself relies on solar power as it conducts experiments in the orbit of Jupiter. And since Jupiter is five times farther from the Sun than Earth is, Juno is also the record-holder for the greatest distance ever achieved in solar power, writes NASA. 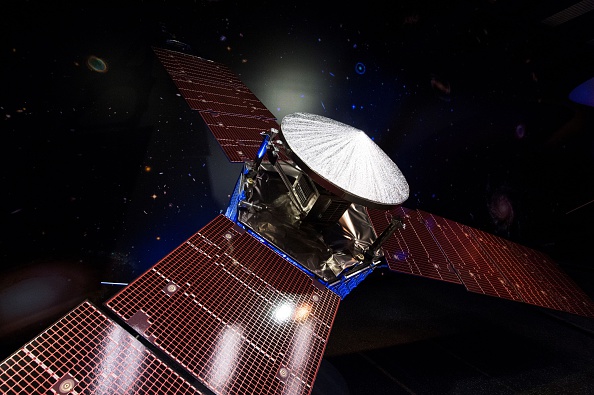 (Photo : ROBYN BECK/AFP via Getty Images)
A 1/5th size scale model of NASA's Juno spacecraft is displayed at the Jet Propulsion Laboratory in Pasadena, California, July 4, 2016. Juno was launched from Cape Canaveral in Florida on August 5, 2011 and is projected to enter the orbit of Jupiter on July 4, 2016 to study the planet's formation, evolution and structure. The key event is a 35-minute engine burn at 11:18 p.m. EDT on July 4 (0318 GMT on July 5), which will slow Juno down enough to be captured by Jupiter's powerful gravity.

Juno was still able to use its massive 66-foot-long solar panels to generate power even if it was 493 million miles from the Sun; a record-breaking distance measured on January 13, 2016.

Related: How Do NASA Rovers And Probes Communicate With Earth From So Far Away?

How Do NASA Rovers And Probes Communicate With Earth From So Far Away?

Voyager 1 Detects a Faint HUMMING SOUND in Deep Space: Is This What We Think it is?