Ford and Rivian will no longer go into creating a joint electric vehicle venture despite its initial agreement to make the clean energy cars while the Michigan-based automaker first gave out its investment. The new direction of Ford is going solo, and they are aiming to produce as much as 600,000 cars from its manufacturing plant, under its EV ventures. 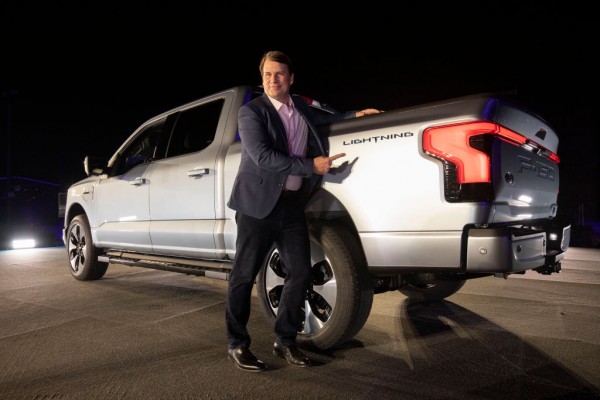 (Photo : Bill Pugliano/Getty Images)
DEARBORN, MI - MAY 19: Jim Farley, CEO of Ford Motor Company, poses with the new all-electric F-150 Lightning performance truck at its reveal at Ford World Headquarters on May 19, 2021 in Dearborn, Michigan. The truck will be built at the all-new Ford Rouge Electric Vehicle Center in Dearborn starting in the Spring of 2022.

Ford and Rivian were supposed to have a joint electric vehicle project that would bring several car ventures that would have a fully-electric motor and modern tech features for all its needs. According to an interview with Ford CEO Jim Farley (via The Automotive News), Ford will produce its electric vehicles alone, and it would be the setup the company would take.

Supposedly, the 2019 investment of Ford would be a project with Rivian that would focus on its funding agreement that both companies would have a joint production and design. There was no further information divulged by Farley regarding this venture, other than it was supposed to be the alternative vehicle to the planned Lincoln.

Ford is Going Solo to Create its EV Fleet

Ford is going solo to create its EV fleet and it would be competing with the likes of Rivian, Tesla, GM, Volkswagen, and more with its clean energy vehicles. Ford's plans include producing as many as 600,000electric vehicles a year, and that would last until 2023. That would be a total of 1.2 million units, for the company's existing EVs and upcoming ones.

Ford has a massive focus on electric cars now and it is aiming to debut more in the future, starting with the company's latest production vehicle, its electric pickup truck, the Ford F-150 Lightning. Currently, the popular American pickup has sold a lot of preorder units in the present, with more than 160,000 units already reserved for its release.

Another of the popular cars of Ford is the Mustang Mach-E, and this is one of the earliest ventures of the company regarding electric vehicles, and it follows the racing breed of its Mustang lineup. However, the new Mustang Mach-E resembles more of a crossover SUV than a muscle car that has two doors only, foregoing the coupe body.

Ford's future will have more than 600,000 electric vehicles coming, and it goes alongside the pledge of several states regarding an all-EV rollout in a certain year, foregoing the ICE cars. The company is adapting to the change and is focusing on the future already, but has not yet revealed what it has to offer in the coming future.