OG, the most decorated team in the history of "Dota 2" has decided to move forward with its new roster for the upcoming DPC (Dota Pro Circuit) season.

The last run of the squad during The International 10 (TI10) has broken a lot of hearts especially with their disappointing loss against the darkhorse crew of Team Spirit, which later won the aegis.

Now, the team seems ready after the T10 heartbreaker, as OG welcomes new faces featuring Misha and Taiga, and three other new talents who have been making names across social media sites.

'Dota 2' OG Shuffle is a Surprise For Fans 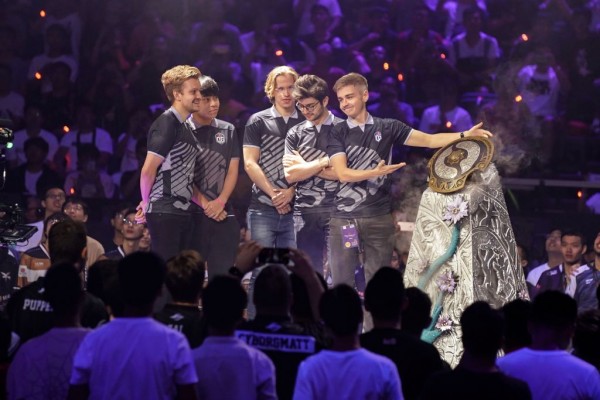 (Photo : STR/AFP via Getty Images)
Members of Team OG, champion of the 2018 Dota 2 Championships, display the trophy during the opening of this year's International Dota 2 Championships in Shanghai on August 20, 2019. - A record 33.5 million USD is up for grabs but professional eSports players like those competing in The International in Shanghai in mid August, pay a physical price with deteriorating eyesight, digestive problems and wrist and hand damage

The #DreamOG goal of the team during the most recent TI run has left a lot of fans in shambles. Specifically, the OG fanatics have been rooting for them to get the third aegis, but there was no three-peat this time.

Having said that, the Western European squad has nothing left to prove anymore since their iconic two-year champ run before COVID-19 became a thing.

The former position 4, Saksa, and OG's carry, Sumail have earlier announced that they would not continue with the team. But before that, OG offlaner Ceb said that he would now officially retire from the pro scene to pave some way for the youngbloods.

The shuffle madness did not end up here. Topson, the team's mid-player, also announced that he would be taking a break to focus more time on his family.

Recently, N0tail spoke that he would be taking an annual break from the esports pro scene. He clarified that he will not shy away from the organization, but will only shift to become a mentor for the new support players for OG, Clutch Points reported on Sunday, Nov.21.

OG said that a new chapter is about to come for the whole organization. This means that we would be seeing raw talents that some of us have never heard of before. Led by Taiga and Misha, the new captain, the OG "Dota 2" team is now preparing to dominate esports once again.

“Winning is a consequence, not an objective”-@Ceb

A chapter closes, a new one is just starting.
We have chosen to bring fresh talent into the Dota scene for the new iteration of OG.

Here is the new OG roster as part of the post-TI shuffle, according to Dot Esports.

Judging from the lineup, most people know the familiar names including Taiga and Misha. The former was an ex-Liquid soft support player who has a wide hero pool. This 23-year-old Norwegian is continuously improving and we look forward to his development for this new home.

Misha will be the current captain for OG "Dota 2" team who will replace BigDaddy. From becoming the coach of OG in the last TI, the 26-year-old position shares the same book with Ceb and N0tail. The two pros mentioned that Misha is a quick learner so he could easily adjust to the changes that would happen within the team.

Back in September during the OpenAI show match against Beast Coast, Misha played as a stand-in for Ceb. He played as Snapfire (position 5) during the exhibition match.

Here's a video from NoobfromUA:

For the carry role, Yuragi (formerly spAce) will be replacing Sumail. This former Team Unique player has a promising skillset. OG expects that the 20-year-old Ukrainian will step up as the organization develops team chemistry.

Meanwhile, the two 16-year-olds "bzm" and "ATF" are the most awaited OG members who will soon step in the professional stage. The first player is a mid-player from Bulgaria who has joined several scrimmages with Creepwave, his previous team.

The last player from Jordan, "ATF" is the most explosive so far. His name is always under the radar of several "Dota 2" outlets. Some fans even thought that Ana would be the last piece for OG, but it did not turn out that way.

According to the fans, this young offlaner is masterful in his skills and with OG under his guidance, he is expected to develop as one of the best position 3 experts soon.

If there is an award for the most shocking comeback in the history of "Dota 2," it would be the return of Jesse "JerAx" Vainikka, the former position 4 of team OG, who recently joined EG.

JerAx is also a part of the two-peat run of team OG.