Valve's Steam Deck is coming to the users that purchased the mobile console via preorders, and it is still on track for its arrival this February. An update made by the Valve team guarantees that the Steam Deck is on time for its deliveries right in the love month of 2022, after its previous delay. It is known that Valve also faced chip shortage issues while producing the portable console. 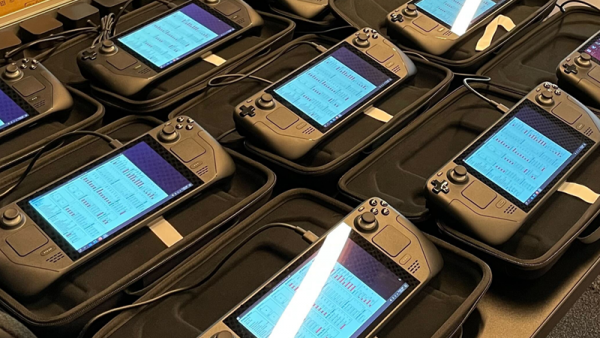 (Photo : Steam Community)
Valve's Steam Deck is Coming this February for a release awaited by game enthusiasts since 2021.

According to an announcement from Valve, the deliveries for the Steam Deck is still on time for February. Nothing is to stop the company from bringing this to its respective owners. The console is on track and on time for its deliveries to those that preordered it from last year when it first saw its release.

The Valve Team also posted this update on their Twitter account, saying that they are to bring the awaited console by February, prioritizing the purchases made last year.

Steam Deck verified games are also following up on the many titles coming to the platform, primarily as Valve already worked with developers and publishers for integration.

Steam Deck is Coming After a Long Wait

Yes, you head that right. The Valve Steam Deck is coming after a long wait, and this is something that the company proudly shares with its customers. It is essential that users also check out their reservations and track their orders via the Steam Deck website to confirm the arrival of their console.

It also states that people who did not purchase the Steam Deck have a chance to buy it this February but will still depend on the stock and availability.

Valve Steam Deck and its Delay

Valve is a company that develops and publishes games, but in the pandemic season (2020 to 2021), the company revealed its plans for a new console. The Steam Deck is an all-in-one console that brings together gaming power, accessibility, and mobile portability that completes its features, being one of the most promising consoles of 2021.

The Steam Deck's delay to February 2022 seemed like a long wait when Valve announced it, but the public is only weeks away from its arrival at their doorsteps. Despite the console clashing in with one of the most popular devices globally, the Nintendo Switch, Valve still keeps its head high for the arrival of the handheld machine.

Indeed, the Steam Deck is a console that succeeds something that is already seen by the public before, but it aims to make a name for itself, being Valve's first take on gaming machines. The portable console is set for a February release to the broad audience after facing a chip shortage that became one of its massive letdowns in 2021.

Related Article: Steam Deck Is Not Getting Exclusive Games: Valve