The Orion Spacecraft was welcomed by about 1,500 spectators awaiting at Mansfield Lahm Airport. The spectators were members of the public invited to watch the viewing exhibits, learn about NASA's Artemis Program, to meet Astronaut Doug Wheelock, and finally to anticipate the arrival of NASA's Super Guppy.

At 4:38 PM EST, the Super Guppy finally arrived, greeted by loud cheers from the very eager spectators. However, the arrival from NASA's Kennedy Space Center ran hours behind schedule, and the opening of the nose of the Guppy was to be delayed until the sunrise of Monday, Nov. 25.

Members of the public again were welcome on Monday morning to view the unveiling of the Orion Spacecraft, and to see the Spacecraft loaded unto a large flatbed trailer to be transported to NASA's Plum Brook Station for testing. 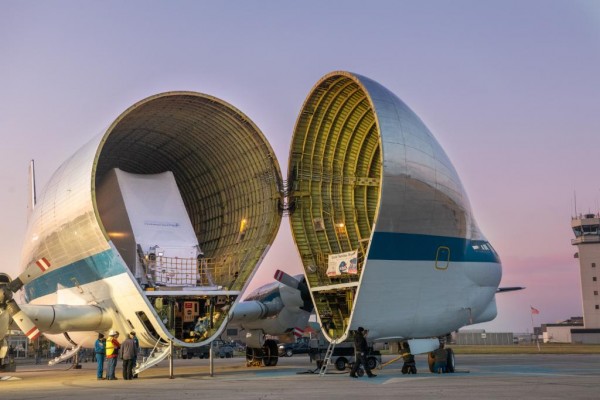 The Orion Spacecraft will be tested in NASA's Plum Brook Station, located inside Brook Park, and is part of the Glenn Research Center. There, NASA hosts the world's largest vacuum chamber used to simulate multiple space conditions.

The tests begin with a thermal test lasting about 60 days, in which the Orion Spacecraft running powered on to simulate a space environment. The spacecraft will be subjected to extreme temperatures of 250- to 300-degrees Fahrenheit, temperatures it will encounter flying through space. The next will be an electromagnetic interference test for about 14 days, ensuring that the spacecraft's electronics will continue to work in different conditions.

The Artemis 1 launch will be the next step in the program, where it will make an unmanned flight to the Moon and back during late 2020. Finally, the NASA Artemis project is next headed to the Moon to land the next man and the first woman by 2024 and will attempt to establish sustainable space exploration by 2028. NASA hopes to make use of the results from each step of the project to move towards the next big leap, to send astronauts to Mars. For now, however, NASA intends to continue rigorous tests on the safety of the Orion spacecraft, and perhaps also study further the safety and well-being of astronauts being sent on long-term missions.

The Artemis Project aims to develop technologies in sustainable architecture, with developments in multiple fields auxiliary to space exploration. Exploration Ground Systems, a network of Earth-based structures required for launch, the Space Launch System, the strongest rocket in the world, Orion, the aforementioned command module, Gateway, a lunar outpost around the moon, Lunar Landers, and Artemis Generation Spacesuits are all technologies developed for the Artemis project to help prepare for NASA's goal of reaching Mars and beyond.