Watch Stunning Video of Asteroid That Nearly Misses Earth: NASA Warns We Might Only Have 120 Years Left!

In a recent video surfacing the internet from a car dash-cam, the sight of a huge fireball exploding in the sky atop German skies has been captured! This video makes for an amazing yet alarming sight because of the near asteroid explosion that took place which could have caused massive damage if it was ever to hit Earth's surface. NASA estimates that the chances of Earth being hit by an asteroid is at 300,000 to one. 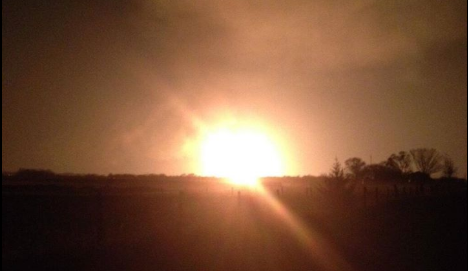 The last asteroid to hit earth wiped out the dinosaurs!

The previous asteroid that was able to hit earth was during the time of the dinosaurs which is estimated at about 66 million years ago which makes it quite a long time since any real damage has been done to earth by these asteroids. Although it has been a long time, the threat is always very much real and if an asteroid was able to wipe out the dinosaurs, how much more human beings? Space rocks are a threat to mankind and although we are already dealing with internal problems within planet earth alone, we still have a whole universe to solve!

Read Also: NASA Disappointed in Boeing Amid 61 Failures That Delayed Starliner! Could SpaceX have been the Better Choice?

There were about 200 witness reports

Due to the multiple witnesses of this sight, the confirmation of what was really seen in the dash-cam video has become positive as the International Meteor Organization or IMO have finalized their deduction as to the situation. The asteroid explosion reportedly turned night into day for a brief period of time due to the bright explosion causing a flash-bang effect for witnesses and everyone within the vicinity. NASA usually warns the IMO if ever there are any irregularities with the movements of space.

The dash-cam was able to capture one of the rarest sights ever as a bright explosion of fire happened just as the space rock hit the atmosphere! This is the only time an asteroid has ever been met with that level of resistance. According to IMO, the definition of a fireball is a meteor which is brighter than normal. With the recent case of the explosion seen in the sky, it is fair enough to say that this was indeed a fireball and not just another meteor.

What is NASA doing about these space rocks?

You may be questioning if NASA is already doing their part and providing countermeasures against this fatal possibility and you are right! NASA is already sending the OSIRIS-Rex spacecraft to gather evern more information about the specific space rock measuring 500 meters in length. The gravity of threat is quite serious as NASA fears that it would be an asteroid to wipe us out within the next 120 years! Would 2135 be the actual end of the world?

Read Also: Why is SpaceX Dragon Bringing Tons of Cargo? What is NASA's Secret Mission?

The mission manned by NASA is looking towards developing effective countermeasures in case another instance like this should happen any time soon!