The coronavirus pandemic is sweeping one nation after another. The virus is not only disrupting lives, but it is now affecting our source of entertainment; ergo music festivals, large event gatherings, and now our precious series and movies! The coronavirus has no pick on whom it infects and is now affecting the showbiz industry.

Read More: Australia? United States? The Search behind where Tom Hanks and Rita Wilson Got Infected by the Coronavirus Continues

A Quiet Place was a surprise hit in 2018 which starred the on and real-life off-screen couple John Krasinski and Emily Blunt in this thriller. Due to its massive success in the box office, it was able to push through with a second movie, A Quiet Place Part II. The problem, however, is that even with production going smoothly, it has now come to a screeching halt due to the coronavirus pandemic and will soon close its doors for the time being until the all-clear is given. 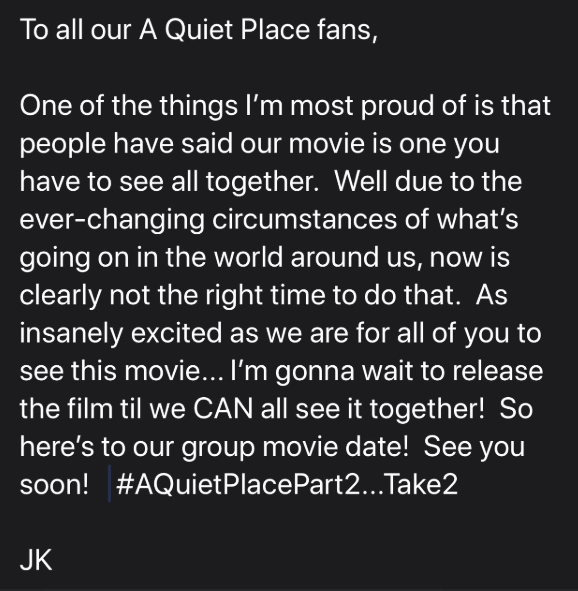 Of course, not just this movie has been affected but also films like the upcoming James Bond No Time To Die to be delayed until November. Even Peter Rabbit 2: The Runaway, which is now moved to August.

A possible star is rumored to be infected by the novel coronavirus, and due to this incident, production is forced to stop to take care of the issue and safety of all cast members and crew.

A rep from Warner Bros. has told CNN: "We have been made aware that a team member from Riverdale, which is produced in Vancouver, was recently in contact with a person who has tested positive for COVID-19," and "The team member is currently receiving a medical evaluation."

Continuing the statement: "We are working closely with the appropriate authorities and health agencies in Vancouver to identify and contact all individuals who may have come into direct contact with our team members. The health and safety of our employees, casts, and crews are always our top priority. We have and will continue to take precautions to protect everyone who works on our productions around the world. Out of an abundance of caution, production on Riverdale is currently suspended."

Riverdale is the latest in a series of shows that are affected by the coronavirus pandemic. Other shows affected are "Live with Kelly and Ryan," "The Tamron Hall Show," and "The View," Not forgetting to mention ALL late-night shows suspended indefinitely as well.

It seems like Toretto and his family have met their match in the form of a virus that quickly turned into a pandemic in only a matter of months. Not even the fastest rides and the bulkiest of protagonists are quick enough to elude this infection. The Fast and Furious 9 stated for release around May 22, 2020, has been pushed back up to April 2021. Vin Diesel, who plays the hero of all heroes, announced social media saying:

"We feel all the love and the anticipation you have for the next chapter in our saga," he wrote. "That's why it's especially tough to let you know that we have to move the release date of the film. It's become clear that it won't be possible for all of our fans around the world to see the film this May."

This is due to the Fast and Furious franchise as much as its popularity on the Western hemisphere, relies more on the Asian box-office. Since cinemas in China, Japan, and other Asian countries begin to close down to avoid the gathering of large people, there seems to be no point in releasing any films at this time.

Read More: USA Now Allows Huawei to Operate in the Country.. But Only Just Few Months