NASA Spacesuits To Be Used by NASCAR, Race Drivers to Keep their Seats Cool—How Does it Work? 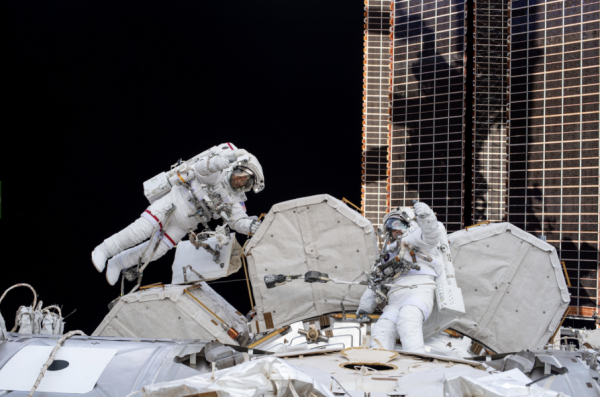 (Photo : NASA)
Spacesuit gloves (left) have to be both dexterous enough to use tools and insulating enough to protect against the temperature extremes of working in space (right). Working with industry, NASA explored the use of phase change materials for these purposes, which was later commercialized.

If there is one thing NASA astronauts and race car drivers have in common, it is their bodies being subjected to different extreme conditions, something which would be potentially dangerous. And despite the dangers, these people will go to their lengths to accomplish their mission or challenge and bring recognition to their teams and sponsors.

Astronauts were known to use heatproof and fireproof suits whenever launching towards their destinations, staying in the orbit, or going down on cosmic destinations like the Moon. This is to protect them from the several harmful elements around, especially the different temperatures present in space, and lack of oxygen in the skies.

On the other hand, race suits from NASCAR and other events are only fireproof and would help a racer be protected from combustions that resulted from accidents or others on the track. In the report by NASA, it has revealed that the space agency would be donating its spacesuit design and technology to NASCAR and other racing events.

This is to answer the massive problem of racing suits that may lead to an extremely uncomfortable feeling of hotness inside the suit. This could hinder a racer's performance on the track, especially as most vehicles have no air conditioning to save on weight.

NASA's Spacesuit Venture was from the 1980s

What the material from NASA would do is to help keep the temperature at a "comfortable" temperature, despite the heat or cold from the external situation in said event. This project was around since the 1980s and has started with only a glove.

In the 1990s, a venture called "Thermocules" has developed underwear with regards to this technology. This was then followed by Outlast Technologies, and even Jockey, who was famous for creating undergarments for both men and women.

The undergarment could withstand an external temperature between 250°F and a -250°F and still keep it at a comfortable feeling before succumbing based on external factors.

NASA's temperature-proof spacesuit technology is not the first innovation that was given to private technologies to develop and use for their products, as this is the company's way of helping other industries like NASCAR.