McFlurry spoons that have an open-ended straw-like design served as an inspiration to a scientist to devise a hiccups curing straw. 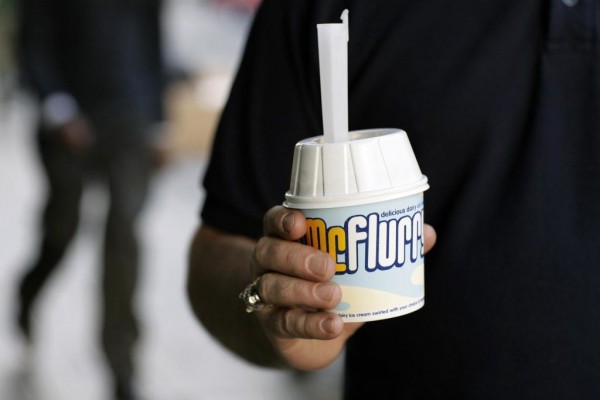 Hiccups are generally annoying due to an uncomfortable experience that frustratingly lingers for some time.

That said, some will go to Google and try out the plethora of remedies and myths flooding the internet. There even goes a suggestion that holding your breath, or consuming a spoonful of sugar helps, but more often than not, it disappoints them.

So, according to Mashable, a University of Texas Health Science Center scientist developed a cure for hiccups based on the McFlurry spoon that looks like a straw.

The invention of the game-changing device began from a father and son bonding.

Dr. Ali Seifi observed his son savoring the McFlurry ice cream using its spoon that has straw qualities as well. He continued to watch his child figure out how to consume the remaining bits of the dessert by sucking through it.

The son's attempt to forcibly suction the ice cream ended up contracting his diaphragm.

From there on, Seifi realized that the McFlurry spoon is more than just an ice cream scooper sporting an odd and confusing design, but it could also help in diagnosing hiccups.

McFlurry Spoon Inspired Hiccup Cure: How Does it Work?

The invention of the Texas-based scientist, HiccAway, helps a person to lower their abdomen and epiglottis, the cartilage we see behind our tongue when we open our mouths. It comes after the user sucked the straw with such force.

Essentially, it will then stimulate the vagus and phrenic nerves, which primarily control our breathing mechanisms and diaphragm.

To cap off the cure, all of these will trigger a person's brain into a reset, thus keeping the annoying hiccups away.

Read Also: McDonald's BTS Meal Chicken Nugget That Looks Like an 'Among Us' Crewmate Sells on eBay

To test if the McFlurry spoon-inspired cure is indeed effective against the displeasure that hiccups bring, the inventor commissioned a study with a total of 203 participants.

The research showed that about 90% of the participants vouched that HiccAways is effective against their hiccups. Unfortunately, the other 10% did not enjoy the benefits that the straw vows to give.

The game-changing straw sells at $14. However, the inventing scientist is generous enough to teach other folks how to DIY their own.

Seifi said that a McFlurry spoon could alternatively be used as a hiccups cure by making the hole on top of it slightly narrower.

In other related news, McDonald's in Taiwan and South Korea faced the wrath of hackers on June 11 as the data of their customers and employees have been breached. Meanwhile, the AI Drive-Thru Bot of the fast-food chain is the center of a lawsuit as it allegedly violated the Biometric Privacy Law.

ⓒ 2021 TECHTIMES.com All rights reserved. Do not reproduce without permission.
Tags: McFlurry Spoon Hiccups Scientist Straw Keeps it Away
Most Popular