LOOK: Solar Flare Hits Earth on the Eve of the Fourth of July Celebrations--The Largest in Four Years

Solar flare fireworks for the Fourth of July celebrations? Possible.

While Americans were preparing for a busy day of merrymaking on Independence Day, the sun erupted with a surprise solar flare--the biggest in the past four years on July 3, reports Space.com. Here is a video of the amazing astronomical event, posted on the VideoFromSpace YouTube channel:

The solar flare erupted from a sunspot called AR2838 and is classified as an X1-class sun event by the US Space Weather Prediction Center (SWPC). This means that the flare was the brightest and biggest type of its kind--big enough actually to cause a brief radio blackout on Earth. Coastal communities along the Atlantic Ocean were among those affected.

For the uninitiated, a solar flare is an ejection from the Sun that contains X-rays and electromagnetic radiation, flung out towards space at the speed of light, according to The National News. Over time, the Sun builds up magnetic energy in the "solar atmosphere," which is sometimes suddenly released in what looks like an explosion for the untrained eye.

Solar Flare Eruptions: How Big Can They Get?

To say that a solar flare is big is an understatement. And during the Fourth of July celebrations, there's no boom as large as that anywhere on Earth, which makes it a little fitting.

Considering the Sun is the largest object in the Solar System, a typical solar flare (even the smallest one) will dwarf a planet like the Earth. According to a post on HyperPhysics, a basic flare (or solar prominence in scientific terms) can measure around 100,000 km in diameter, roughly 10 times the diameter of Earth itself. And that's a tiny one compared to the X1-class flare that erupted ahead of the Fourth of July.

The Proxima Centauri flare was, in fact, big enough to make scientists strongly consider that life forms (even primitive, durable ones like tardigrades) couldn't exist in any of its planets. It's safe to say that we Earthlings are lucky that the Sun only sends out something far less powerful than that. Furthermore, while solar flares do occur several times a day, even far fewer actually manage to reach Earth. 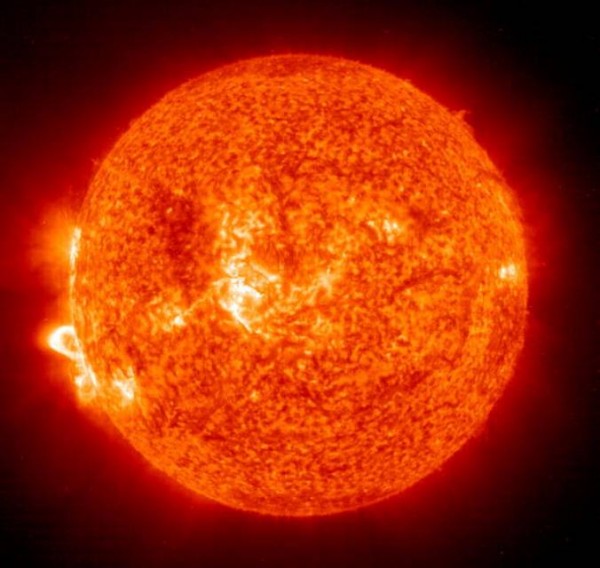 (Photo : NASA via Getty Images)
IN SPACE - NOVEMBER 18: In this handout photo provided by NASA, a Solar and Heliospheric Observatory image shows Region 486 that unleashed a record flare last week (lower left) November 18, 2003 on the sun. The spot itself cannot yet be seen but large, hot, gas-filled loops above this region are visible. These post-flare loops are still active.

For now, the planet should be content that even big solar flares can only do as much as disrupt radio communications. But this is still not "safe" per se since industries that rely on the radio (maritime, specifically) could be severely affected if they're in the middle of the ocean. But if you don't really use the radio that much in your daily life, then you're not in too much trouble.

Related: Solar Flares, Storms from Sunspots Can Cause Power Disruptions, Radio Problems Here on Earth-Soon Coming to the World

Solar Flares, Storms from Sunspots Can Cause Power Disruptions, Radio Problems Here on Earth—Soon Coming to the World

Proxima Centauri's Gigantic Solar Flare: What Does it Mean for Hosting Life in its System?

NASA Discovers 'Sunspots' Forming on the Sun, Sprays of Plasma Seen on Surface—Is this Dangerous?