SpaceX's Falcon 9 rocket and Dragon have been captured by a satellite from orbit on Aug. 27. It comes ahead of the cargo resupply launch of the former from the NASA Kennedy Space Center to the International Space Station, or shortly known as ISS, nears. 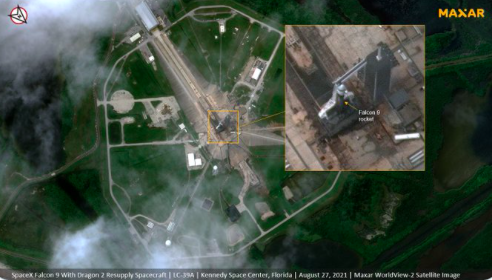 (Photo : from Maxar Technologies Twitter )
SpaceX Falcon 9 rocket spotted by an orbit satellite ahead of its ISS or International Space Station Cargo Launch on Aug. 29 from NASA's Kennedy Space Center. Here’s how to watch it.

The ISS cargo resupply mission of SpaceX's Falcon 9 rocket is expected to launch at 3:37 am on Aug. 28, Saturday. That is if the weather permits.

However, it is to note that there is a least 40% chance that the weather might not be in favor of the launch.

The resupply mission of SpaceX Falcon 9 ended the two-month drought that the space company of Elon Musk has faced after installing laser terminals to its satellites.

To be exact, the WorldView-2 satellite from Maxar Technologies has been able to take a photo of the two SpaceX vehicles, namely the Falcon 9 rocket and the Dragon cargo spacecraft far away from orbit.

The space tech firm further flaunted the photo on their Twitter account, saying that it was able to spot the Falcon 9 rocket of SpaceX from the Kennedy Space Center of National Aeronautics and Space Administration in Florida (NASA).

We got a nice look through the clouds at LC-39A at Kennedy Space Center, Florida of @SpaceX’s #Falcon9 rocket that will launch a Dragon 2 spacecraft on its third cargo resupply mission to the @Space_Station. Launch is scheduled for August 28 at 3:37 am EDT. pic.twitter.com/Y2OJDV7LQ6

According to Space.com, the WorldView-2 launched 12 years ago as a commercial observation satellite for the Earth.

Maxar, a sub-brand of DigitalGlobe, another commercial space company, has been operating the satellite since it debuted in 2008.

As per Newsweek, NASA is hosting the live telecast of the SpaceX Falcon 9 rocket launch on Aug. 28, 15 minutes before the actual liftoff on its Twitter page as well as its website.

Not to mention that NASA TV via its website will also stream coverage of the resupply mission launch from 3:15 am on Saturday, Aug. 28.

What's more, people could also follow the coverage of NASA on the arrival and docking of the Falcon 9 when it lands at the Internation Space Station, which is expected at about 11 am on Aug. 29.

However, the NASA TV coverage for the arrival and docking will start its broadcast at 9:30 am.

The ISS resupply flight of the SpaceX Falcon 9 marks the 23rd Commerical Resupply Services mission or CRS of the Musk space innovation firm.

Elsewhere, the President and Chief Operating Officer of SpaceX, Gwynne Shotwell revealed during the 36th annual Space Symposium that the liquid oxygen shortage is likely to affect future launches of the company.

The supply of liquid oxygen that have been facing shortages is mainly due to the COVID-19 surge brought by the more transmissible Delta variant in the United States.