Sea Machines' Self-Sailing Tugboat to Test 1,150 Mile Trip on Open Waters, See If It Can be Commanded by Autonomous Ships

Sea Machines is on the verge of debuting its first self-sailing Tugboat, which would traverse the open waters and navigate a 1,150-mile journey on its own. The project is to test the ability of its autonomous ship is going to the open waters alone, without the intervention of humans when steering away from danger or performing the daily processes.

Another known self-driving feature would be Tesla's Full-Self Driving, and it is one of the most popular ones now, especially as the clean energy company is on the verge of releasing the feature among the public. However, not it remains as a beta, as it cannot fully guarantee the safety of people on highways and public roads. 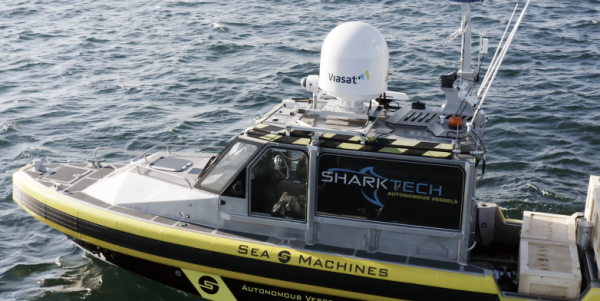 Sea Machines has focused on making water vehicles updated to the latest technology, and that is evident with the company's self-sailing tugboat, which it aims to bring up to operational status. While their boats are already working, it still needs further tests and actual sailing to ensure that its tech and features would work.

Think of it as the FSD, but is intended for water vehicles and dealing with maritime problems instead of traffic. Yes, the self-sailing autonomous tugboat is aiming to take on the open waters by itself, without any guidance from a captain or its popular remote-control boats, which can be operated even ashore.

The company has three versions for its autonomous ships, and it is with the SM200, SM300, and, SM400 respectively. The self-sailing starts with SM300, and the SM400 is the most advanced version among the three, while the SM200 is the one that needs a wireless remote control for it to function.

The company is aiming to embark on a 1,150-mile journey that would test the independence and technology of the tugboat, something which could tell if it is ready to be on its own. The company is also aiming to see if the world is ready for self-sailing boats to roam around the open waters on their own, having its delivery and intended use for the vehicle.

There are a lot of concepts for Autonomous Tugboats, and it is a popular one because people know it for its iconic look and features, which have been around since the early days. Now, it can be updated to be more advanced compared to modern ships where people have been using it for all the needs or functions it has.

While this has been a massive concept since the early days of its development, it has not quite "boomed" compared to that of self-driving cars. There are several "auto captain" features for boats, but it still needs someone to watch over it and intervene when possible.

The current feature for ships is to keep their course steady or maintain a certain speed while sailing. Soon, it would change, thanks to the likes of Sea Machines and other ventures.