SpaceX Inspiration4 Mission: Where to Watch the All-Civilian Launch Online

SpaceX's Inspiration4 mission is set to launch on September 15. Inspiration4 is the first all-civilian launch of the Elon Musk-owned space company.

The Inspiration4 crew will be launching from Pad 39A at NASA's Kennedy Space Center in Florida. They will free-fly around the planet for around three days before heading back down to Earth.

SpaceX Inspiration4 Launch: Where and How to Watch

SpaceX's Inspiration4 mission will be a historic one as it is an all-civilian flight and will not include any astronauts in its crew. If you want to witness such a historic event, you can watch the launch of the Inspiration 4 mission online.

According to a report by Space, SpaceX's YouTube channel will have a launch webcast on Wednesday, the launch date of the Inspiration4, at 3:45 p.m. EDT (7:45 p.m. GMT). Space will also provide a stream of the launch, which will be courtesy of SpaceX.

What You Need to Know About the Inspiration4 Launch 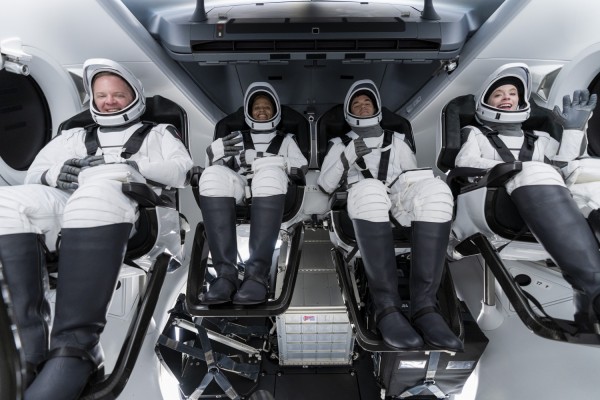 The all-civilian crew of SpaceX's Inspiration4 mission will board the Crew Dragon spacecraft that will be launched to space by the Falcon 9 rocket.

Included in the spaceflight are certain objects that will be used during the three-day free-fly around Earth. Among these items is a ukelele, a Fisher Apollo 11 50th Anniversary Space Pen, and an NFT of a performance by the band Kings of Leon.

The Inspiration4 mission will be launching from Pad 39A at NASA's Kennedy Space Center in Florida.

The Inspiration4's all-civilian crew is composed of four members. Billionaire and Shift4 Payments founder Jared Issacman is one of the four crew members of the mission and is considered as the mission's commander.

According to a separate report by Space, "Isaacman didn't want just another billionaire spaceflight on the books, he wanted the mission to really mean something, so he led a campaign to raise money and awareness for childhood cancer research."

Because of that, the Inspiration4 mission has now become an effort to raise $200 million for St. Jude Children's Research Hospital.

St. Jude's has its own representative on the flight, and her name is Haley Arceneaux. She works as a physician's assistant in the hospital and is actually a childhood bone cancer survivor. She is the medical officer of the flight.

The third crew member of Inspiration4 is Sian Proctor, who is the mission's pilot. She works at South Mountain Community College in Arizona as a geosciences professor. The fourth crew member is Chris Sembroski, an Air Force veteran who won his seat after making a donation to St. Jude's and his sweepstakes entry was randomly chosen.

SpaceX’s Inspiration4 to Fly NFTs, Ukulele, Time Magazine to Space and Auction it on Earth