iPhone 13 vs. iPhone 12: Spec by Spec Comparison—Cameras, Display, and MORE

The iPhone 13 was launched to the public at Apple's event on Sept. 14, providing the official specs of the latest smartphone. Thus, we could now compare it to its predecessor, the iPhone 12. 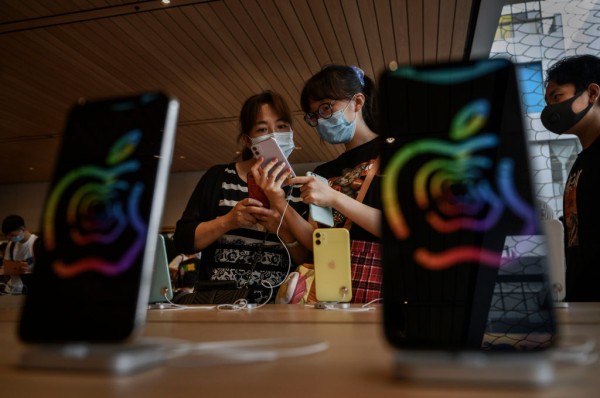 (Photo : by Kevin Frayer/Getty Images)
BEIJING, CHINA - JULY 17: Chinese customers look at iphones at the official opening of the new Apple Store in the Sanlitun shopping area on July 17, 2020 in Beijing, China. The new store replaces Apple's first ever China store which opened in 2008 prior to the Beijing Olympics adjacent to the new location.

As per PhoneArena, the iPhone 12 and the iPhone 13 looks similar from afar as the newer smartphone still kept the same general design and size as the older handheld device.

It is to note that there are slight design changes that the iPhone 13 flaunts, and that it is a bit heavier than its predecessor.

What's more, Apple also noted that one of the improvements that the latest smartphone is sporting is the longer battery life.

Not to mention that the iPhone 13 is touted to carry more camera improvements, among other slight upgrades.

Without any further ado, let us dive in on the new iPhone 13 and compare it with its predecessor to get an initial idea if getting the latest device is worth your money.

First off, Apple highlights that the iPhone 13 has better cameras, but based on its camera hardware, it is much similar to what the iPhone 12 also featured.

To be precise, its wide camera and ultra-wide camera are identical with both flaunting 12 megapixels. The former on the two devices have a 26mm, f/1.6 aperture, while the latter has a 13mm and f/2.4 aperture.

On the other hand, the main camera of the iPhone 13 can capture more light at about 47% more than the iPhone 12's primary snapper. As such, the newer smartphone could take better photos at night or low-light settings in general.

The latest flagship also gets a new sensor-shift OIS that helps produce clear photos even in unstable situations.

On top of that, the iPhone 13 introduces Cinematic Mode, which is essentially the Portrait mode for taking videos.

Another new software feature on the latest Apple device is called the Photographic Style, which is an AI filter that corrects the colors, shadows, and highlights of an image.

According to Tom's Guide, both smartphones still flaunt the flat-edge design that the iPhone 5s last exhibited.

Basically, the iPhone 13 and iPhone 12 look similar to each other, except for two factors---the smaller notch and the diagonal camera layout of the newer device.

On top of that, there is also a new color option, which is pink, but the green variant of the previous smartphone is no longer available on iPhone 13.

Although both smartphones carry a similar body, the iPhone 13 is a bit heavier and thicker at 174g and 7.65 mm compared to the 164g and 7.4mm of the previous phone.

That could perhaps be due to the bigger battery that the new phone sports, which Apple said could last 1.5 hours longer than its predecessor.