Face swap apps can be entertaining or creepy depending on who you ask, but the photos they generate will always elicit some sort of reaction. It can be a cringe, a look of disbelief, and even a chuckle or a full-blown laugh.

It can also cause controversy, just like how a Chinese face swap app called Zao received criticism back in 2019. Instances like that aside, face swap apps can be used all in good fun, especially when they are created and used responsibly.

If swapping your face or someone else's face for another person's is your idea of amusement, there are a couple of face swap apps out there that you can download and try yourself, especially if Snapchat's face swap feature is not cutting it for you.

Here are some of the face swap apps you can download straight to your phone! Take note that while many apps are available in both the Google Play Store and Apple App Store, certain apps are only available in one or the other.

Related Article: Let The Fun Begin: Snapchat For iOS Now Allows You To Face Swap With Pictures In Your Camera Roll

According to an article by Beebom, this app has a feature called Paste Face, which "allows you to take the face of anyone in an image and paste it on top of anyone else' face with ease."

Cupace is available in Google Play Store only.

According to an article by Make Use Of, Face Swap Booth does not do an automatic face swap. Instead, the app "lets you swap particular characteristics instead of entire faces." For example, you can put someone's eyes or lips on the face of another person.

The app also provides celebrity templates you can use if you want to face swap with a celebrity. You can also do multiple face swaps using group photos.

The Face Swap Booth - Face Changer app is available for both iOS and Android. 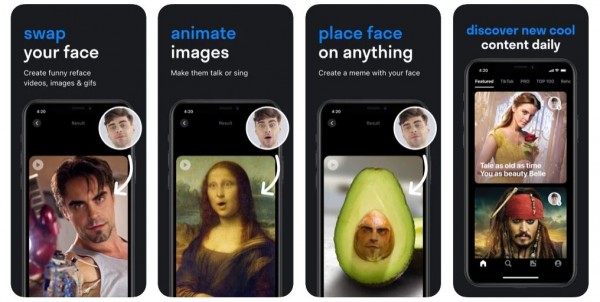 There are face swap apps there that involve videos instead of photos. One of these face swap apps is Reface. The Reface app lets you swap your face with celebrities' faces and even lets you create memes and gifs.

According to Reface's app info in the Google Play Store, it now has more than 100 million downloads. In-app purchases can also be made when using this face swap app.

The Reface app is available for both iOS and Android.

Also Read: Watch This UK Nan (Grandma) Get Adorably Distressed When She Is Live Face Swapped With Beyonce And Others

Let The Fun Begin: Snapchat For iOS Now Allows You To Face Swap With Pictures In Your Camera Roll

The Internet Is Losing It Over Creepy Face-Swapping, So Here's How To Use Snapchat Face Swap