'Token Tanks' NFTs to Go on Sale on Sept. 24, Play-to-Earn NFT Game in the Works

"Token Tanks," a collection of tank NFTs, is set to go on sale on September 24. There are a total of 10,000 tank NFTs in the collection.

Eventual holders of these NFTs will be able to use their tanks in a play-to-earn NFT game that is in the works. The multiplayer tank battle NFT game is set to launch a beta next year. 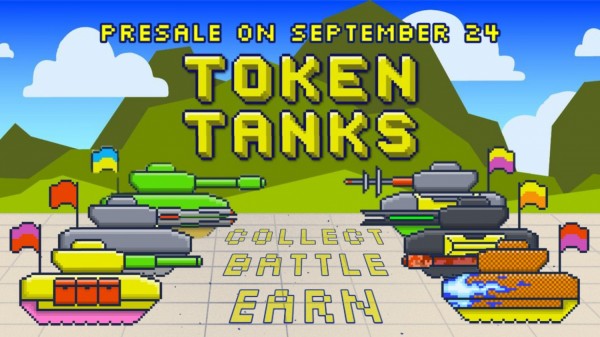 Each tank is "armed with distinct attributes, ranging from aesthetic traits to performance enhancing weaponry that help players strategize different attack mechanics to defeat opponents," according to the "Token Tanks website.

NFT holders will be able to use their tanks in a play-to-earn NFT game. According to a separate post on their Medium page, the game will be a multiplayer tank battle mobile game.

Per the "Token Tanks" website a private beta of the game will launch during the first quarter of 2022.

In the game, tanks are equipped with two different weapon packs, each that contain "five class specific attacks that will distinguish performance mechanics that will help Gunners defeat their opponents," according to the Medium post.

"Token Tanks" is just one of the many NFT collections that will eventually be part of different NFT games that are currently in the works.

"Dragons of Midgard," a recently launched NFT collection, is an example of NFTs that will have an NFT game. Not much is known about the NFT game just yet except for the fact that it is a play-to-earn game that is set to launch later this year.

"Panda Fight Club" is another example of an NFT collection with a game that is set to arrive later this year.

Other examples of NFT collections with game tie-ins include "CryptoDads," which will have a lawnmower game, and "Sushiverse."