NASA Perseverance Rover's advanced camera lenses were able to capture new images of the Red Planet, which are considered mission-critical.

Some of them even show new signs that water existed on Mars. Perseverance Rover, a six-wheeled robot developed by NASA, first reached the neighboring world last Feb. 18.

The giant space agency integrated a total of 23 advanced cameras into the machine explorer. All these lenses are unique since each of them captures a different perspective, allowing NASA to capture wide-angle, panoramic, and close-up shots of the Red Planet.

On the other hand, the company also explained that all the captured photos and videos from February until now are being compiled to have a more comprehensive view of Mars.

According to Space.Com's latest report, the cameras integrated into Mars Perseverance Rover are critical for NASA's space missions. 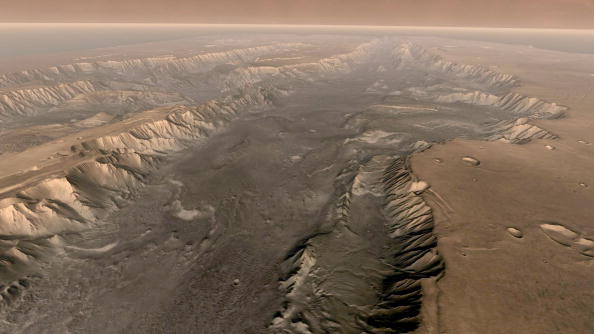 (Photo : Photo by NASA/Arizona State University via Getty Images)
Mars' own Grand Canyon, Valles Marineris, is shown on the surface of the planet in this composite image made aboard NASA's Mars Odyssey spacecraft. The image was taken from a video featuring high-resolution images from Arizona State University's Thermal Emission Imaging System multi-band camera on board the spacecraft.

"The imaging cameras are a huge piece of everything. We use a lot of them every single day for science," explained Vivian Sun, NASA Jet Propulsion Laboratory's first science campaign co-lead.

When it comes to the actual images, some of them show the view of Delta Scarp, a bluff of the fan-shaped delta river on the Red Planet. On the other hand, there are various photos that show some hints of huge flash flooding, which might have occurred in the huge boulders.

Aside from these, the newly captured images also suggest that there could have been lava or magma flowing on the crater floor, leading to igneous rocks.

Aside from capturing videos and photos of Mars, the giant space agency is also making efforts to avoid the so-called "space station gap," which could happen once ISS retires.

SPACE NEWS reported that the commercial space stations are ready before the International Space Station completely shuts down. As of the moment, ISS is expected to be removed or go inactive around 2030.