Tesla's FSD Beta 10.2 is the latest update that would be released by the company to bring the latest features for the autonomous driving system of the company. Elon Musk has confirmed that the update would come this Monday night, October 11, and it would be Tesla's take on the improvements of the feature, which saw several flaws in Beta 10.1. 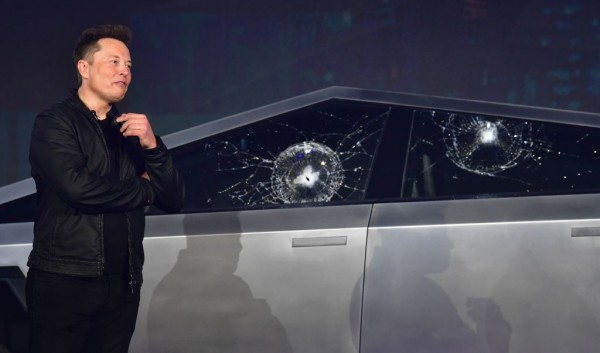 (Photo : by FREDERIC J. BROWN/AFP via Getty Images)
Tesla co-founder and CEO Elon Musk verbally react in front of the newly unveiled all-electric battery-powered Tesla Cybertruck with broken glass on windows following a demonstation that did not go as planned on November 21, 2019 at Tesla Design Center in Hawthorne, California.

A Friday morning tweet by Elon Musk has revealed that the Tesla FSD team is aiming to bring the Beta version 10.2 by Sunday, October 10, or Monday, October 11 for all users. Musk has confirmed that it was delayed for several reasons but has not gone into the details of what happened internally.

Nevertheless, this means that the FSD team has had a busy weekend to focus on the release of the latest version of the autonomous driving feature, as noticed by a fan.

Here, Musk took the opportunity to address the release of the Beta 10.2 version of the FSD that would have been released to users by Monday, October 11, in the latter part of the day. Yes, users can have this automatically updated overnight and have it good to go in the morning, if ever they are part of the FSD Beta user program.

Team is in fact working hard! They just confirmed 10.2 is good to go tomorrow night.

Read Also: Tesla Pushes the Date of the Full-Self Driving Software Roll Out as There are Concerns That Needs To Be Fixed

Beta 10.2 would answer the features that the previous versions have lacked on, especially as it brings the latest update of the FSD for Tesla vehicles. One of its main focuses is bringing more slots of users to be a part of the Beta version and its release, which evaluates a person's Safety Score before having the button for the download.

The FSD is not yet perfect, hence it being in a beta stage. But that does not mean that it would be stuck in releasing beta versions all its life, or with Tesla focusing on that aspect of the autonomous driving feature. It would continue to improve and bring everything that it promises to the public, like a hands-free driving experience.

The existence of the FSD is to bring comfort, accessibility, and what is essentially the future of driving, as it intervenes on the roads and drives for a person. And while that may be a new concept or thing in the present, it is something that is slowly being integrated into the human lifestyle, soon to be adopted by many car companies.

Other companies like General Motors, the Volkswagen Group, Rivian, and more, are also looking into a proprietary autonomous driving feature, which may or may not resemble the FSD.

Nevertheless, this is Elon Musk and Tesla's innovation for the public, giving them the feature which has been a long question in the automotive industry.