The HiRise camera recently snapped photos of a giant sand dune on the Kaiser crater of the red planet. The minerals that appeared in gullies produced different colors from the surface. 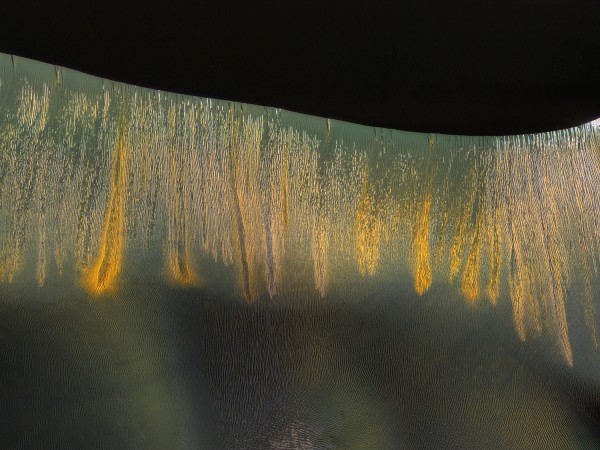 Since 2006, the Mars Reconnaissance Orbiter (MRO) has been carrying the HiRise to capture minute glances of Mars. This time, the camera snapped some high-quality photos of the glowing sand dunes on the Kaiser crater.

Scientists have been studying the erratic seasons that happen over the region. According to a report by Universe Today, these changes paved the way for the reshaping of the planet's landscape.

The HiRISE team noted that every year, the sand dunes come out on the surface of the crater during late winter. Moreover, this is the time when the sun usually hits the slopes. At the same time, the carbon dioxide frost undergoes sublimation which means it transforms to gas from its solid state.

"Some of these gullies produce a variety of colors that are highlighted on the west-facing (illuminated) slopes, where the gullies appear to be glowing in the winter light," the HiRISE crew explained.

The famed Kaiser Crater is situated between Argyre and Hellas, the two humongous basins in the Noachis Terra. The location contains many ancient craters that's why it is regarded to be one of the oldest land spots in the region.

The word "Noachian" came from Noah, which means "ancient" time.

Last week, the Mars Perseverance rover showed fascinating images of sand dunes formed on Mars. The images highlighted the clear details of a Martian dust which was taken last Sept.25 through the Right Navigation Camera of the vehicle.

According to Screen Rant's report, the images could hint at the possible presence of microscopic life that once roamed the planet. Somehow, this assumption was made as part of the scientists' research about the planet.

Elsewhere, the Mars Curiosity rover first examined the sand dunes on the planet in 2015. At that time, the team explored the Bagnold Dunes, which is situated on the northwest side of Mount Sharp.

The team noticed that there were some adjustments in the color seen on the landform. They even compared its colors to the sand dunes on Earth in broad daylight.

At first glance, the pristine appearance of the sand grains resembles an untampered Martian spot. The team discovered this finding when they zoomed the camera.

Another image of the Martian sand dune showed the ripples on the surface. There's also a crack on the sand containing the loose grains.

In March, the MRO team revealed some interesting photos that present the frosty sand dunes on the planet. It was seen on the northern plains of Mars.

There were striped patterns in the crater floor which suggest that the ice had just got thawed recently. The HiRISE camera witnessed the breathtaking images from an altitude of 196 miles.