Intel, after months upon months of rumors and leaked benchmarks, has finally introduced their 12th gen lineup of Alder Lake CPUs in an official fashion.

(Photo : Pavlo Gonchar/SOPA Images/LightRocket via Getty Images)
UKRAINE - 2021/07/16: In this photo illustration, Intel logo is seen on a smartphone and a pc screen.

Intel's product stack is led by the flagship Core i9-12900K, which has proven to be a monster in numerous leaked benchmarks from the past few months. The i7-12700K and the i5-12600K constitute the lower-tier chips.

It's also worth noting that the i9, i7, and i5 chips all have "KF" versions, which means they don't have integrated graphics.

Intel designed every single chip, including the KF ones, to have a base TDP of 125W. The higher-end chips will have higher boost TDPs, though.

The i9 chips are going to boost to as high as 241W; i7 is at 190W; and the i5 will boost to as much as 150W. What this means is that any buyer going for Intel Alder Lake will need sufficient cooling to keep temperatures in check.

All of the rumors about the i9-12900K proved to be true, at least in terms of specs. The CPU does indeed feature a total of 16 cores (8 "Power" and 8 "Efficiency" cores) and 24 threads, with the Power cores being hyperthreaded. 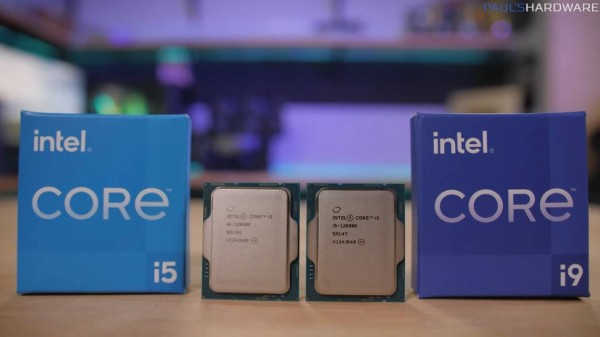 Power cores can go to a max turbo of 5.2 GHz, though Intel didn't specify if this is all core or merely targeting specific cores. The Efficiency cores can reach as high as 3.9 GHz. Lastly, the 12900K features 30 MB of SmartCache.

These specs are just the tip of the iceberg and there's plenty more under the hood, but you can learn more about the other new tech that Intel 12th gen chips are infused with in this YouTube video from GamersNexus:

What Did Intel Do For Performance?

All of the leaks that featured the top-end Core i9-12900K has suggested that Intel Alder Lake is going to be a beast, both in gaming and productivity tasks. These benchmarks are, however, still unconfirmed as of the moment.

The Intel 12th gen chips, which all feature new Golden Cove cores, are rumored to boast at least a 20% improvement in IPC (instructions per clock) over the previous-generation Rocket Lake cores, reports PCGamer.

Official reviews of the Intel 12th gen CPUs are still on the way to confirm if the previously leaked benchmarks are all true.

The official release date for Intel Alder Lake is set for November 4th, writes AnandTech. For now, Team Blue seems to be focusing on releasing higher-end SKUs first, and this is evident in the lack of i3 chips in the initial product stack.

Ahead of the launch, preorders for the chips are already live, reports PCGamesN.

Related: Reddit User Shares Images of Unreleased Intel Core i9- 12900K That He Bought For $610 Apiece