Not every day is a comet gazing day. That's why once astronomers find Comet Atlas in deep space and heading towards planet Earth, it was a fantastic find. Unfortunately, on Sunday, Apr. 12, the said comet will no longer pass on Earth as experts found it 'shattered.' What happened? 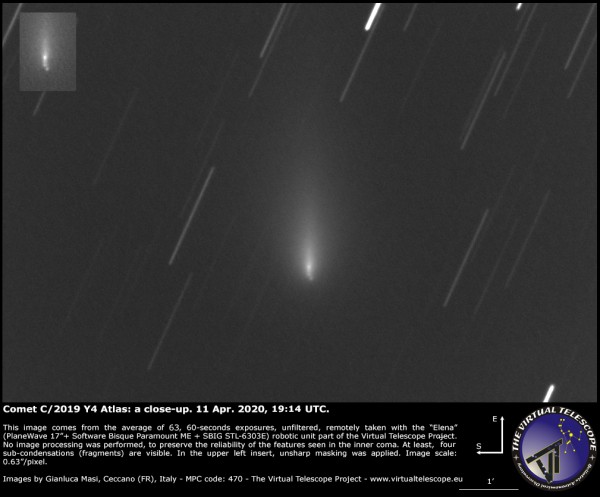 As first reported via Space, Comet Atlas has officially broken into little pieces. Astrophysicist Gianluca Masi, the founder, and director of the Virtual Telescope Project in Italy revealed this sad news in an emailed statement on Sunday, Apr. 12. According to him, Comet Atlas "has shattered both its and our hearts. Its nucleus disintegrated, and last night I could see three, possibly four main fragments."

As seen on the image above, the core of the comet disappeared into pieces-- showing its death.

"After our observations suggesting the presence of fragments in the inner coma of this comet, we imaged C/2014 Y4 Atlas every night. In particular, tonight, we observed at least three fragments, telling the comet really experienced a breakup event," said Masi. 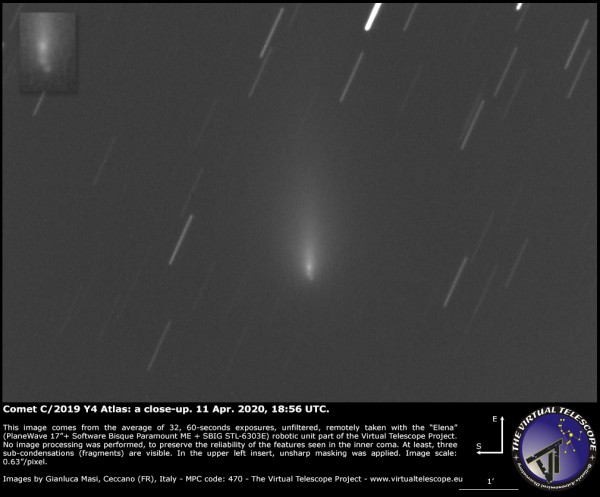 The second image shows that the Comet Atlas appears to be rapidly disappearing compared to the first image. This was the time when it was concluded that the Comet has officially been wiped out in the space.

What is Comet Atlas?

Tech Times reported last month that Comet Atlas was expected to be the next big thing in the space world. Earth has currently not seen live comets passing by on the planet, suggesting the idea of 'comet drought.' However, this changes when ATLAS or C/2019 Y4 was discovered shining brighter compared before.

As said, back in December, Comet ATLAS was only found in Ursa Major and was an exceedingly faint object, close to 20th magnitude or 398,000 times dimmer than normal stars seen in the skies. However, on Mar. 17, experts recorded an increase in lumination of magnitude +8.5 that was 600 times brighter than astronomers expected.

As said by experts, Atlas was expected to be on its brightest state, next month. It was even said to increase in lumination for almost 11 magnitudes causing Comet ATLAS to be able to compete with Venus for the title of the brightest object in the night sky after the moon.

Unfortunately, this will no longer happen for now.

Space website explains that comet breakouts are a normal event in space. These normally happen when the comet suddenly changed its track and move near the Sun-- which might what happen on Comet Atlas.

Don't worry, though, the rate of comets that fly near Earth is still on high numbers. This means that the chances of comet gazing are still not an impossible wish for most of us.

ALSO READ: NASA: Captured Infrared Images of The 'Pillars Of Creation' Being Devoured By Stars Released