Elon Musk SpaceX Tourism: Anyone Can Soon Go to Space and It is Thanks to Inspiration4

Elon Musk said that SpaceX's Inspiration4 and soon missions would ensure that anyone can go to space in the coming future, as the mission studies the upcoming venture. Space tourism is going wild and more apparent these days, as people's dreams and aspirations of going past the atmosphere are growing closer each day.

The Inspiration4 crew has a mission, and it is to further improve upcoming spaceflights for the civilians and those whose bodies are not trained or not made for the harsh conditions in the heavens.

The group's multi-day journey started on September 15, and after three days, they would return not only with smiles and waves but also knowledge regarding space tourism.

Elon Musk: Anyone Can Go to Space

SpaceX CEO Elon Musk (@elonmusk) has said via Twitter that anyone can go to space, and it is something that people are guaranteed and assured in the coming years. All of that is thanks to the Inspiration4 mission, which has shown the possibility that selected civilians can embark on a journey and stay in space for days.

A Twitter fan has expressed his dreams and aspirations to the CEO, saying that his goal or wish before he dies is to be able to go to space. He addressed the CEO and SpaceX regarding this, as they are the ones with the pioneering technology and program for space tourism, something backed by successful launches and the latest mission.

Space at first is for selected people only, and this is what pushed a lot to strive and pursue their passions by becoming engineers, medical personnel, researchers, scientists, and other careers related to space. Some have been given the chance to be drafted into being an astronaut, as it takes training and conditioning to be one.

However, soon those would change, as the possibility of space tourism is brought by companies like SpaceX, and it includes competitors like Blue Origin and Virgin Galactic. 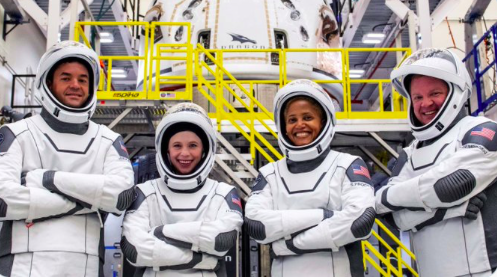 Space Tourism is a type of tourism that would bring people to space whenever they like, purchasing a ticket like when buying a seat to an airplane when traveling domestically or internationally. It is not yet available, and companies like SpaceX are still preparing for it, but it would soon be a regular thing as successful missions show.

The Inspiration4 mission is a real inspiration for all, especially as it shows that anyone can go to space with the right resources and apt planning. Of course, going to space would subject people to a lot of stress, pressure, and fatigue which is why an adequate training program is needed to condition the body soon.

This conditioning would soon have additional information thanks to Inspiration4.

Would it be Costly to Go to Space?

Of course, it would be costly to go to space, as it requires a lot of resources to launch a single rocket. However, Musk says that it would soon be cheaper than it is now, as the industry progresses and improves.