The U.S. Navy could soon have a real-life ray gun laser weapon. As of the moment, the United States only has one weapon similar to a ray gun. This is the current lower-energy laser system called Zeus, which is specifically designed to destroy landmines. 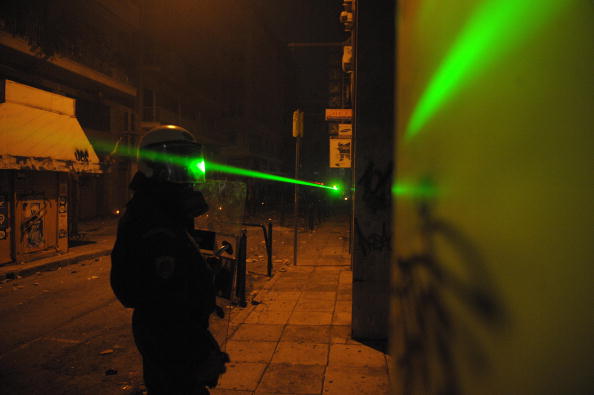 (Photo : Photo credit should read OLIVIER LABAN-MATTEI/AFP via Getty Images)
Protesters point a laser light at a riot policeman outside the Polytecnic school in central Athens, early December 14, 2008. The police killing of the 15-year-old a week ago has set off widespread riots and led to clashes between protesters and police. AFP PHOTO OLIVIER LABAN-MATTEI

Aside from America, there are also other countries that are developing their own versions of ray gun laser weapons. These include China, which was able to develop a similar war instrument that could fire more than 1,000 laser shots.

Each of these shots is said to last two seconds. Now, the U.S. Office of Naval Research confirmed a new compact and portable ray gun system is already in development.

According to Popular Mechanics' latest report, the new ray gun is expected to be completed between 2023 and 2025. It is specifically designed to take down enemy drones, one of the hardest war machines to shoot down. 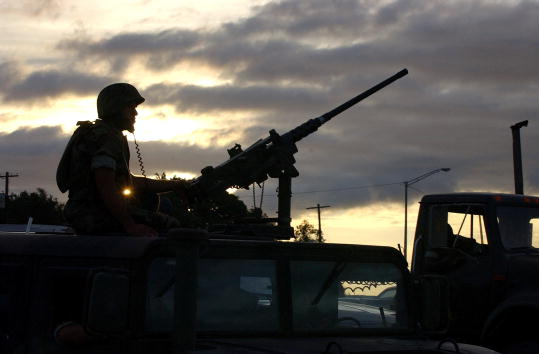 (Photo : Photo by Michael W. Pendergrass/US Navy/Getty Images)
A Marine positions himself behind a 50 caliber machine gun mounted on a Humvee all terrain vehicle during a convoy detainee rehearsal run from the airport to Camp X-Ray January 10. 2002 in Guantanamo Bay, Cuba. Camp X-Ray will be one of the holding facilities for Taliban and al Qaeda detainees.

On the other hand, a Department of Defence contract, which was filed on Aug. 18, confirmed the arrival and development of the new laser weapon.

The defense department also explained that the new U.S. Navy ray gun would be integrated with the most advanced commercial weapon components in the market.

U.S. Navy is not the only one making huge advancements in its defense system. The U.S. Air Force also created a new system that would offer more efficient navigation assistance to the country's operating jets.

The new Airborne High Energy Laser or AHEL would soon be tested on the advanced AC-130J gunship. However, involved developers estimated that the field testing would still take a lot of time before it is actually conducted, at least around 2030.

For more news updates about U.S. Navy and its upcoming war innovations, always keep your tabs open here at TechTimes.