NASA's Curiosity rover has spotted a unique rock feature located in Gale Crater in late July. The experts noticed its unusual shape, which resembled a lizard, in the form of a Martian rock.

According to them, the unusual formation is so tiny that its 6.5-inch shape was truly fascinating.

NASA Scientists Were Amazed of the Rock Feature 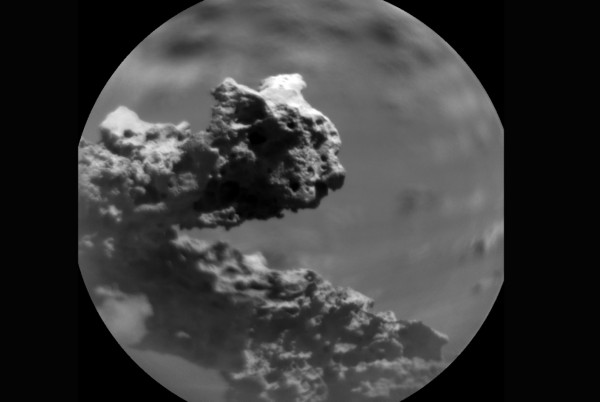 In a blog post dated July 28, NASA's Jet Propulsion Lab planetary geologist, Abigail Fraeman said that she was dazzled upon witnessing the rock textures in the Gale Crater. She highlighted the protruding lumps and the small bumps in the feature.

From the Gale Crater, the Curiosity rover captured a good look at the feature at Mount Sharp.

Fraeman said that the international space agency has found out some information about the Martian rocks.

It was concluded that there were sulfates in the rock formations, but they could be washed away by the water. This would also tell that Mars has a history of having water through its sulfate-clogged layers.

The planetary robot is intended to look for the potential presence of life on the red planet. For nine years, it has been circling around the Gale Crater in search of something interesting like unusual minerals, rocks, and even microbial organisms.

According to the rover team who operates the robotic vehicle, Curiosity recently detected the instability of clays around the Gale Crater.

Before, the experts said that possible life on Mars is present. Given this scenario, the evidence that could point them out could have been already erased as a result.

In addition, there is a possibility that the salty water that washed away the evidence could hint at the existence of the fossils on the red planet.

For scientists, there should be an ongoing experiment for this research.

At the moment, the Curiosity Rover is capturing important images of rocks through the ChemCam instrument. This tool will help the scientists calculate the mineral and chemical composition of the rocks, Live Science reported.

Marsquakes and Methane in the Red Planet

In June, the Curiosity rover surprisingly came across some traces of methane. The researchers assumed that the presence of this chemical might tell the past lives that existed on Mars.

During the time, ESA's (European Space Agency) Trace Gas Orbiter was not successful in detecting it, but NASA's TLS (Through the Tunable Laser Spectrometer) tool has tracked a pinch of it.

In late July, another piece of NASA equipment, the InSight lander, discovered more information about the red planet's deep interior. Based on the findings of NASA researchers, the top layer of Mars is around 6 miles when it comes to thickness.

Before, the robotic vehicle has uncovered that more than 170 marsquakes had already occurred on the planet.

Related Article: NASA Mars Curiosity Rover Shows Some Rock Records Are Missing; Does This Mean No Intelligent Life on the Red Planet?