'Battlefield 2042' New Release Date is a One Month Delay? But, DICE Says Game Would Arrive Before 2021 Ends

"Battlefield 2042" fanbase would have to wait longer than expected as DICE, the game's developer, confirmed that it would be delayed for more than a month. 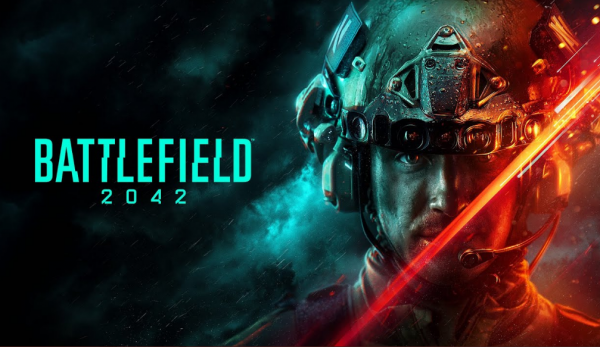 (Photo : Screenshot from Twitter post of @BattlefieldGI)
'Battlefield 2042' New Release Date is a One Month Delay? But, DICE Says Game Would Arrive Before 2021 Ends

I'm looking forward to call of Duty vs Battlefield going head-to-head, and I definitely want Battlefield to win

"Given the scale and scope of the game, we had hoped our teams would be back in our studios together as we move towards launch," said Oskar Gabrielson, DICE's CEO.

On the other hand, he also said that the current ongoing COVID-19 pandemic is one of the major factors why the delay is happening. The game publisher's CEO added that the DICE development team is doing its best, even though some staff is working on the new game at their own houses.

Aside from this, he reassured the fans that "Battlefield 2042" would arrive before 2021 ends.

According to Engadget's latest report, the delay would surely disappoint many "Battlefield" fans since the new version is the next entry in EA's long-running first-person shooting title series. 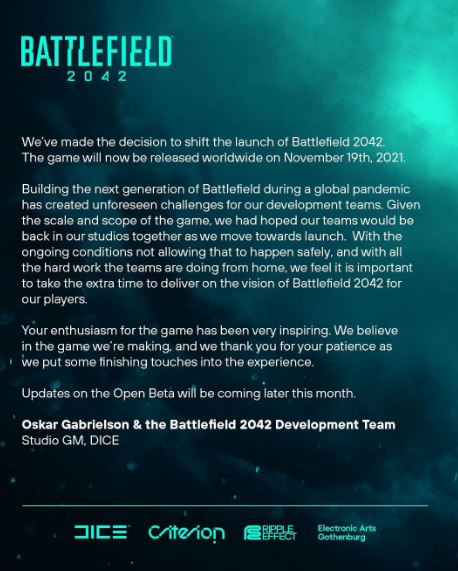 (Photo : Screenshot from Twitter post of @wrighty_plays)
'Battlefield 2042' New Release Date is a One Month Delay? But, DICE Says Game Would Arrive Before 2021 Ends

I’d rather it gets delayed & they take some more time , I’m sure it will be worth it ❤️ #BATTLEFIELD2042 pic.twitter.com/81opTU8FFC

In the comment section, some players already shared their disappointment. One of them even said that he thinks DICE and EA are just using the pandemic as an excuse for the delay.

He added that a game could be delayed, but using the pandemic as an excuse for more than three weeks adjustment is already the company's fault. Although this is the case, some fans are still happy since they believe that DICE would use the one-month delay to enhance the new title further.

Is COVID still affecting these games this heavily? or is this just the new excuse everyone just eats up. Don’t get me wrong, a game has every right to be delayed if it’s simply not ready yet but a 3 week delay and we’re blaming it on COVID? Why aren’t they good to go after vax

In other news, some games are getting deleted, including the popular "LittleBigPlanet," which Sony permanently shut down. On the other hand, the new "Marvel's Wolverine" is also set to arrive on the PS5 platform.

Other Details of 'Battlefield 2042'

Since the new shooting title is delayed, you can still use the remaining time to research more about the game, allowing you to have an advantage before you enter the actual battlefield.

These include the map list, which has the following new places:

For more news updates about the new "Battlefield 2042" and other upcoming games of EA, always keep your tabs open here at TechTimes.