Twitch streaming is not only limited to gaming as popular streamers have a different gimmick to keep their fans on the go. It's always the newest thing on the platform that captures the heart of the followers.

The most recent trend on Twitch is the snooze fest, where a lead analytics service, StreamElements has estimated that users have more than 2 million hours of sleeping streams' viewership last month.

This is attributed to Ludwig Ahgren, who rose in ranks to pull a slumber party in front of his computer. 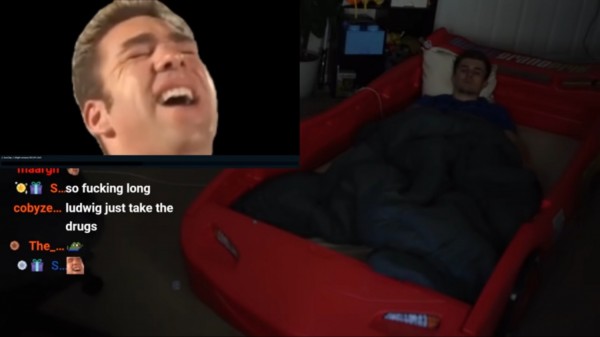 According to a report by Polygon,  Ahgren's stream has boomed to mass popularity after he hit the 1.5 million mark of hours viewed on the platform. Currently, the 25-year-old streamer is enjoying his "subathon," which says that when a user subscribes, he will add 10 seconds for his stream.

Presently, Ahgren has been doing the snooze fest for 26 days from day to evening. The most amazing part of his sleep-streaming journey is collecting a huge number of 65,400 live viewers which he did not expect to come.

what the hell is even that

In his tweet on Mar. 15, the comedic Twitch streamer said that he fell asleep on his stream at the time only to wake up as the most-watched streamer on the streaming platform.

Read Also: Overwatch's 'Fearless' Speaks Out About Asian Racism in America-Who Is the Twitch Streamer from Dallas Fuel?

Who's This Another Twitch Streamer Who First Did Sleep Streaming?

In a report by Report Door, Ahgren was not the first person who has gone streaming while sleeping. It is Mizkif who pioneered it in Twitch. At the time, viewers have watched his stream for as many as 500,000 hours.

The streaming follows the usual method of what people expect on it. Simply, the person should sleep on a bed, and the viewers only watch him/her while dozing off.

For Ahgren's part, this trend is still rising although it could sound boring sometimes. What he does is lying in his twin-size race car bed, while the moderators handle the chat messages throughout the entire time.

There are also a lot of different discussion topics that users could enjoy, like talking about game guides and sharing thoughts about the videos on the platform.

The chat will also pick the videos as long as it obeys the rules in Twitch. Some of these videos include "Minecraft" parodies, a television clip, a short video of a movie, and even anime videos. Streamers also used to feature playing "Uno" games at the moment.

The most common scenario when Ahgren wakes up, viewers will spam Pepe emoticon and "Jammies" to compliment Ahgren's pajamas. The chat channel will suddenly go crazy as a result.

Ahgren has also streamed a short video of him who just woke up. In this short clip, he changed positions many times while sleeping. The video has now over 188,000 views on Twitch.

The first thing that you will think about when you enter sleep streaming is its vibe which looks like a slumber party. Although the discussion's pace is slow, there are other things that you can enjoy hanging out with other people even amid the COVID-19 pandemic.